A homeschooling mother of eight children, Simonetta Carr was frustrated by the lack of church history curriculum for children under the age of twelve. There were plenty of books for that age group on presidents, artists, musicians, scientists, and other important figures, and, Simonetta explains, “if a young child can understand Martin Luther King’s vision and struggle, he should be able to understand John Calvin’s desire to give direction and organization to a young Reformed church or Augustine’s conflict of the wills.” She tried to persuade some church history graduates in her San Diego, California, congregation to take up the task of writing curriculum and even created a mock-up copy of the books she envisioned with some home-made illustrations. When she could convince no one to take up the challenge, she decided to send her idea to some publishers.

Thankfully, Reformation Heritage Press recognized the value of Simonetta’s vision, and the first two books in the Christian Biographies for Young Readers series, John Calvin and Augustine, released in 2009. Future books in the series will tell the stories of John Owen, Athanasius, John Knox, Lady Jane Grey, John Bunyan, Charles Spurgeon, and others. In a winsome storytelling style and with illustrations that consist of illustrations, photos, maps, and historic artwork, these books introduce young readers to the lives, thoughts, and writings of the important people of church history.

At a time when the church was more interested in riches and power than in its faithfulness to the teachings of the Bible, some Christians fought to return to the truth.

Those who fought for truth were called “Reformers.” To “reform” means “to change for     the better, and that period in history is referred to as “the Reformation.” John Calvin was one of the most famous Reformers.

In language that is within the grasp of readers ages 7–10 yet not condescending, the author traces the events of Calvin’s life, describes his accomplishments and his writings, and encourages children to one day soon read Calvin’s writings “for yourself.”

In Augustine, readers are introduced to the church father’s life and writings, and the author tackles the difficult subject of the teachings of ancient heretics, including the Manichees and Pelagius. Where Pelagius taught that “Adam and Eve just left us a bad example,” Augustine taught, “We are saved by God’s grace, which is a gift that we do not deserve. When Adam sinned, he died spiritually, and since then everyone is born spiritually dead. Only God’s grace can bring us to life in Jesus Christ and give us the ability to follow His rules.” And in this manner children are introduced to the rich truths of Scripture that have come to light throughout church history. Other features in each volume include a map on the first page that readers can use to trace the subject’s travels, a time line of the subject’s life at the end of the book, and a “Did You Know?” appendix with interesting facts about the subject and his culture. For example, did you know that in Calvin’s day common people lived on the second floor of two-story houses while their livestock lived on the first floor?

I asked two of my young friends, Benjamin (age 11) and Madeline (age 8) Guis, what they thought of these books. Ben read Augustine, and he says he “would recommend it to friends without hesitation.” Ben comments,

One of my favorite parts of this book was the full description of Augustine’s life. In     particular I liked the story of how he turned to Jesus Christ as his Savior. I enjoyed this part of the story because the author was able to write how Augustine was able to     come to faith with the help of his mother as well as other important people in his life.

Madeline has good things to say about John Calvin. She enjoyed the descriptions of Calvin’s travels and thought the author’s description of “how he was forced out of Geneva was interesting.” She also liked the way the author explained the difficult words that she anticipated her readers might not understand. Madeline was a little disappointed that some of the illustrations in the book were not in color. But she concludes that the book “was interesting and fun in many parts.”

Simonetta Carr has provided a valuable resource for children and families of Reformed churches with the Christian Biographies for Young Readers series. Children will be both educated and entertained by these delightful, beautifully illustrated volumes. 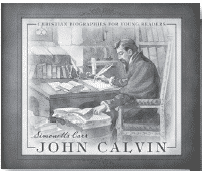