Muslims and Christians at the Table: Promoting Biblical Understanding Among North-American Muslims was co-authored by Bruce A. McDowell and Anees Zaka and published by P&R Publications. These men have extensive knowledge of the Islamic faith as well as extensive personal experience in ministering to Muslims at home and abroad.

Over the past several decades there has been an amazing growth of Islam in Canada and the USA. The mission field is literally being brought to our doorstep. Christians must catch the vision of reaching these lost souls for Christ. God has given the commission “to make disciples of all nations” (Matthew 28:20). God is bringing the nations here, giving us an opportunity to bring the gospel to Muslims; such an opportunity is not afforded to missionaries in developing nations. In their book, the authors set forth the historical, cultural, and theological background of Islam as a foundation for witnessing to Muslims, to encourage witnessing to our Muslim neighbors with the gospel, and to teach readers how to witness to them more effectively by promoting biblical understanding.

The authors emphasize that, in order to be equipped to evangelize the Muslims, one must know the Scriptures well. One must also have a living relationship with the Sovereign God and must have solid Christian support. For effective ministry to the Muslims, it is necessary to understand the history of Mohammad’s life and the development of Islam; these are foundational to the Muslim’s worldview, and essential in our ability to relate to them. Additionally, if we understand some elements of Islamic culture, it will help us in building relationships. The apostle Paul wrote in 1 Corinthians 9:20, “To the Jews I became like a Jew, to win the Jews.” I would insert “Muslim” so that the passage would read, “to the Muslims I become like a Muslim, to win the Muslims.” This means being sensitive to the Muslim cultural norms, so we can avoid offense and misunderstanding.

• In the Muslim culture, if a woman is friendly with a Muslim man, especially for a recent immigrant, and looks him in the eye, he will automatically assume that there is marital or sexual interest. This does not hold true in Western culture. In Western culture, women look men in the eyes when conversing. Because of this cultural difference, it is imperative for Christian men to witness to Muslim men and Christian women to Muslim women. Ladies, do not look a Muslim man in the eye! As mothers of daughters, do we warn them when they enter academia or the work place where there is a possibility of having foreign fellow students that are Muslim men or having male Muslim co-workers, of the message they unwittingly convey when speaking with a Muslim man as an equal? For the Muslim there is no cultural conflict—he may marry a non-Muslim woman. However, because he is the head of the household, he dictates that the religion of the household will be a Muslim. This fits with their zeal to win the world for Islam. This same gender equality is not afforded in the Islamic culture for women, hence a Muslim woman’s life is in serious danger if she befriends a non-Muslim man.

• Because Muslim men and women eat and visit separately, we need to consider this when extending them an invitation to a meal or for a visit.

• Clothing: the Muslim women have the dress code of servitude; in due consideration, we as Christian women must dress modestly.

• The view of sacred books: When using the Holy Bible, never use one that has handwritten notes. In addition, one may never have the Bible below waist level or place it on the floor. For the Muslim that shows total disrespect. They worship the Qur’an. Because of that, we must show due respect for our sacred book. Muslims view the Qur’an as Christians view Christ.

• Crossing your legs shows the soles of your feet—this is considered very disrespectful. Stereotypes hinder American Christians from reaching out and witnessing to their Muslim neighbors. Preconceived ideas and attitudes build barriers. How do we break these down and build bridges? The authors seek to present a more realistic view, showing that Muslims are in many ways much like us. They have hopes and dreams, loving families, work, school, and have spiritual needs, as we all do. Many are hospitable and good neighbors. Many are not out to destroy Western civilization. Most of them are ambitious to convert the Christian to Islam; this becomes the opportunity we have to discuss our faith with them.

Islam and the Qur’an know Adam, Noah, Abraham, Jesus, and other Bible characters; but the stories are distorted. Islam also holds to belief in God, Jesus, sin, salvation, good, and evil; however, the Muslim understands those truths quite differently from the way Christians do. 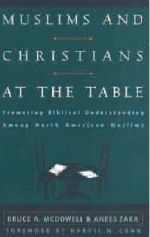 As it is easy to bring offence when countering the truths and ideas that others greatly treasure, the authors teach how to sensitively bring the gospel. The authors offer helpful lessons on how one does present the truth. Because Muslims believe that the later revelation of the Qur’an trumps and essentially nullifies the previous revelation of the Bible, they do not consider the Bible as having authority. The Bible is the Christian’s one authority. This presents a major challenge for the Christian in witnessing to the Muslim, but we can overcome these difficulties. By establishing mutually acceptable rules of dialogue and by using specific references from the Qur’an as points of contact, we can open up the Holy Bible to them and reveal Christ.

It is imperative that as ambassadors for Christ we proclaim the gospel of salvation in the Lord Jesus Christ. In order to do so, we need to develop relationships. Then as we meet and talk as friends, we can enter into discussions of the Truth and make comparisons between the Bible and the Qur’an. This book gives suggestion for cross-cultural Bible studies. Witnessing Christians must present their convictions with love and humility. Love is imperative. If love is absent, it is virtually impossible to communicate the gospel effectively, because that makes the possessor of that conviction obnoxious, and the dogma possessed becomes repulsive.

The authors have provided an excellent resource of practical applications to minister to Muslims. The book has a wealth of information; because of that, however, it is not necessarily an easy read. In the light of the fact that the nations of the world are on our doorstep, and Jesus gave the mandate “to disciple the nations,” including those that espouse the Islamic faith, I highly recommend this book for church libraries and for reading by both church leaders and lay people.