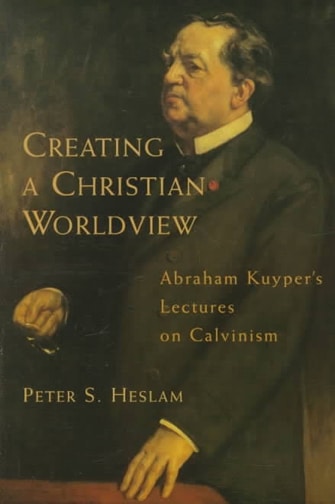 Two books dealing with Abraham Kuyper were placed on my desk recently. One was entitled Abraham Kuyper: A Centennial Reader, James D. Bratt, editor, also published by Eerdmans. The Reader deals with Kuyper materials not previously available in English and, with a couple of exceptions such as articles on Common Grace, focuses on a slightly earlier period in his life than the one reviewed here. It is worth reading after Heslam’s book.

Kuyper at this time? Well, a bit of history is in order. Kuyper’s name is familiar to many of us. He was a noted theologian, politician, journalist, educator, and an exceptional thinker. He had tremendous influence on the spread of Calvinism and the Reformed faith in America. It is now one hundred years since Kuyper delivered his famous Stone Lectures on Calvinism at Princeton Theological Seminary. In the lectures, he covered a number of topics, but the main thrust of his series ‘was that “there is no area of life over which Christ has not said mine.’” Creating a Christian Worldview deals with his influence on American thinking and serves as a commentary on those famous Stone Lectures.

This is an outstanding book — a book of ideas and a book about the origins of a Christian worldview. Heslam not only sets forth sound ideas relating to a Christian worldview, but prepares the way for us to understand what it means to be Christian in both a modern and postmodern world. The author states in the preface of the book that “worldview belongs to the vocabulary of modernity.” He further states “Postmodernity’s rejection of ultimate answers is accompanied by a fresh and uninhibited interest in questions of meaning, purpose and identity.” Some postmodernists would even agree with his criticism of modernism.

Heslam combines a good history of modern times with his outstanding exposition of a Christian world and life view. And he presents to us the life and work of a man God used in a tremendous way to challenge modern rationalism whether in the form of anti-Christian philosophies or the rationalism brought into Presbyterian circles from Scottish realism. He also addresses some of the personal aspects of Kuyper’s life. I especially appreciated his handling of the relationship between Kuyper and B. B. Warfield of Princeton. Heslam speaks of the strong admiration of the two men for each other, but does not fail to deal with their differences.

In my own life, through the truths set forth in his Lectures of Calvinism, Kuyper not only helped me in my development and study of cultural apologetics, but showed me how to blend theological orthodoxy with “cultural progressiveness.” Heslam states, “Although he sought a revival of traditional Calvinistic religion, he did not advocate a return to pre-Enlightenment conditions in the hope that this would help the cause of Christian civilization. Kuyper aimed at being a progressive and innovative leader.”

Heslam points out that Kuyper was Reformed in doctrine and Calvinistic in his view of life. If there is one thing that is obviously missing from much of contemporary evangelical thought it is a Biblical worldview. We have compartmentalized our Christianity from the rest of life. For Kuyper, Calvinism was the context of truth to see the world through God’s eyes. It gave him a broad view of the church and a wholistic, all-inclusive view of the Kingdom of God. As the Apostle Paul stated, “In all things Christ pre-eminent.” That was Kuyper’s desire.

Heslam writes, “Kuyper’s term “life-system’ was intended as an equivalent to the German Weltanschauung, usually translated ‘worldview’ in English.” Although, he explained, “‘world-and-life-view’ was a more accurate term, and preferable to James Orr’s ‘view of the world’ he had chosen ‘life-system’ in the title of his lecture…’” Kuyper saw Calvinism as a total life-system, not as a narrow set of doctrines or a particular ecclesiology. Heslam is right to point out that Kuyper’s thoughts were cast in his opposition to three major troubling elements, namely, the French Revolution, pantheism, and evolutionism, but the application and challenge of the Stone Lectures are much more global than this.

Kuyper’s affinity with Calvinism came because, as Calvin had done in his own day, he radically reinterpreted and reapplied the central tenets of Reformed doctrine. For this reason he has been called a Neo-Calvinist. I think he set a pattern that is not only right, but absolutely necessary for us to have a strategic impact on our postmodern world.

Kuyper, in the Stone Lectures, set forth an approach to Christianity that was not grasped by the Fundamentalist Movement. Whereas they sought to be Biblically narrow (to the extent of withdrawing from the world), Kuyper wanted us to see that we cannot withdraw from the world. He believed that the Bible is the basic source of God’s special revelation and grace. But he also saw the Sovereign God as the author of all truth and all truth as God’s truth following the pattern of Augustine and Anselm. One of Kuyper’s best contributions to a Calvinistic view of Christianity is the doctrine of common grace. Not all of God’s truth is written in the Bible, nor is fallen, unregenerate man totally devoid of God’s truth.

We need to read, study, and discuss this book in the church today. We are so reactionary to the world and so other-worldly that we often are not able to impact the world for the Lord as we otherwise could. Our view of the Christian faith needs to be broadened and extended to all areas of life. Our narrow view of the church must be broadened to reflect not only Reformed doctrines, properly understood and applied, but also Calvinism in the historic sense of the term. That was Abraham Kuyper’s great desire.

Kuyper has the clearest concept of Christianity and culture that I have known. He addressed the subject of that relationship from a thoroughly Biblical perspective. He has influenced many of us to develop a Christian world and life view. I agree with Heslam’s last statements in the book, “He [Kuyper] provided a solution that was so broad in its scope, distinctive in its influence, and successful in its practical consequences, that it deserves ongoing study and reflection.”