Jesus answered and said to him, “Most assuredly, I say to you, unless one is born again, he cannot see the kingdom of God.” John 3:3

In John 3 we read of a wise old ruler by the name of Nicodemus who came to Jesus by night. The conversation they had is perhaps one of the most familiar conversations of Jesus, and yet, it is also one of the most misunderstood passages in all of Scripture.

Nicodemus came to Jesus. He was a Pharisee, a member of the Jewish ruling council, a teacher in Israel. He was the one to whom the people of Israel were to go to for advice—and he came to Jesus. He came, however, not as a typical Pharisee. Nicodemus was not one who would likely have contorted his face on the street corners while fasting so that others could see his suffering. He was not likely one who prayed on the street corner at the appointed hour so that others could hear his beautiful prayers. He was not one who had externalized his religion. Nicodemus was a godly Pharisee.

The Pharisees has a lot of good things going for them. They believed in man’s moral accountability. They believed in the resurrection of the body and in a future life with its rewards and punishments. But they also believed in a salvation by works—that somehow a person could earn his way to heaven. Because of that, they were ardent followers of the Law.

To make certain that they kept the Law, they made more laws. For example, if an insect was biting your arm on the Sabbath, you were not allowed to kill it or even remove it from your arm, lest you be guilty of hunting on the Sabbath Day. The Pharisees had compiled over six hundred laws concerning the Sabbath Day just so that one would remember to keep the day holy as God had commanded.

So, there was Nicodemus. He had seen or heard of the many miraculous signs that Jesus had performed. He had heard of the uplifting teachings of Jesus and witnessed the excitement of this new teacher. Nicodemus saw in Jesus something that the other Pharisees missed. He saw Jesus as a teacher come from God.

How that must have excited Nicodemus! How nice it would be for this teacher of Israel to ask this teacher from God a few questions. As an ardent follower of the Law, Nicodemus must have often wondered if he was doing the right thing. How often he must have wondered how he could know for certain that the laws he was keeping were enough to earn salvation.

Before the Reformation, a young monk by the name of Martin Luther would climb on his knees up and down the stone stairway of the monastery in penance seeking forgiveness. On his mind was the constant fear that when he got to heaven he would not have climbed enough steps to attain forgiveness. How horrible it would be to hear the words of God in judgment saying, “No, Martin Luther, you missed entrance into heaven by three steps.” Like Nicodemus, Luther wondered if he was doing the right thing.

How often we ask ourselves that very same question: “Am I doing the right thing?” How can we know for sure that we are going to heaven? If you ask representatives of many religions today (Romans Catholics, Jehovah’s Witnesses, Mormons, etc.) what assurance they have that when they die they will go to heaven will answer, “Absolutely none.” For them, for Luther, for Nicodemus, and often for us there is that constant lingering question: “Am I doing the right thing for my salvation?”

The Radical Teaching of Jesus

This question was so much a part of the life of Nicodemus that he didn’t even have to ask Jesus the question. Jesus answers it before Nicodemus can even ask it. The answer Jesus gives is a radical answer! The answer He gives is completely different from that given to the rich young ruler. He knew Nicodemus was one who tried to diligently keep the Law. He did not have to tell him to be a keeper of the Law. He did not tell Nicodemus to love God with heart, mind, and soul. He said, “Unless one is born again, he cannot see the kingdom of God.”

For Nicodemus, who expected that the Law was sufficient, this was a radical answer. It is radical because a radical change must take place in a person’s heart. All too often when this passage is read the conclusion is: “You must be born again! You must make a decision!” That is, however, not what Jesus teaches in John 3. In fact, Jesus teaches that you cannot make the decision to be saved by yourself. You must be born of water and the Spirit! Jesus went on to teach that the Spirit is like the wind. You can hear the sound of it, but you cannot tell where it has been or where it is going.

It is the Spirit of God who chooses you for eternal life. It is not a sinner choosing to be saved. Just as with our first birth, we are completely passive in our rebirth. It is not by keeping and teaching the Law, Nicodemus. It is not by doing penance on your knees at the monastery, Luther. It is not by living a moral life, going to church, or participating in the sacraments, dear reader. None of these provides salvation. Salvation is the work of God through the Holy Spirit. It is a gift from God.

To be born again involves a total abandonment of every attempt to become righteous by yourself and instead depending entirely upon the death of Jesus Christ for your salvation. It is trusting completely in Jesus.

When Jesus said that a person must be born again, He was not saying, “By all means see to it that you are born again.” Jesus was saying salvation is not something that you have to do but something that has to happen to you. The Holy Spirit has to plant the life that is from above into your heart.

That is where the assurance comes. It is not our own deeds that bring us eternal life. It is something the almighty God has preordained long before the earth was ever created (Ephesians 1:4). God chose us not because we were such nice people. He chose us not because we have bloodied our knees on cement steps in penance. He chose us according to His good pleasure and He implants in His own a new life. It is all an act of God.

The Promise of Assurance

This should not have been anything new to Nicodemus. As a leader in Israel, he should have known about the great power that God has to change lives. God had promised in Ezekiel 36:26, “I will give you a new heart and put a new spirit in you. I will remove from you your heart of stone and give you a heart of flesh.”

For Martin Luther this was the great and marvelous revelation that sparked the Reformation! Climbing up and down those stairs on his knees, he recalled Paul writing, “My grace is sufficient for you.” He recalled the words of Romans 3:28, “For we hold that a man is justified by faith apart from the works of the law.” And he recalled the words of Romans 5:1, “Therefore, since we are justified by faith, we have peace with God through our Lord Jesus Christ.” 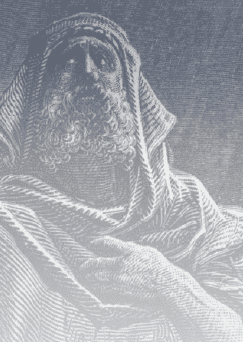 No longer did Luther have to fear that the number of steps he climbed was not enough to grant salvation. It did not matter how many steps, if any, he climbed: faith in Jesus Christ would justify him. Salvation was his through the grace of God by the sacrifice of Jesus Christ.

Our assurance of salvation does not come from ourselves based on our choosing correctly. It is from God who has chosen us to be His own. He has brought salvation to His elect, and nothing can snatch them away!

This gift, however, was not without price. The very one to whom Nicodemus was speaking paid the price. Through His suffering and death we are granted the assurance that we may walk holy and blameless before God. He paid the price for all who place their hope in His atoning sacrifice.

The question that we must ask is not, “Am I doing the right thing for my salvation?” The question we should ask is, “How can I best express my love to the One who guarantees my salvation through His own death?” Out of love for what Christ accomplished on our behalf, we seek to live lives that bring glory and honor to our Savior, Jesus Christ.