The focus on men instead of God has permeated the whole of life and society in our times. Therefore we need to be alert whenever we are presented with something worldly combined with a Christian-sounding flavor, like so-called Christian psychology. There are Christians who are trained as psychologists, but the discipline of psychology is not Christian or non-Christian in and of itself. This is a difficult issue, because many so-called Christian psychologists work within the secular worldview with just a Christian veneer, thereby leading their patients away from the gospel without them even realizing it. There is a great need for psychologists who will help their patients by pointing out the sufficiency of Scripture.

The goal of this article is to make you aware of the differences in approach, and to provide help to distinguish between the biblical and the secular practice of psychology, and why the biblical one offers much more. 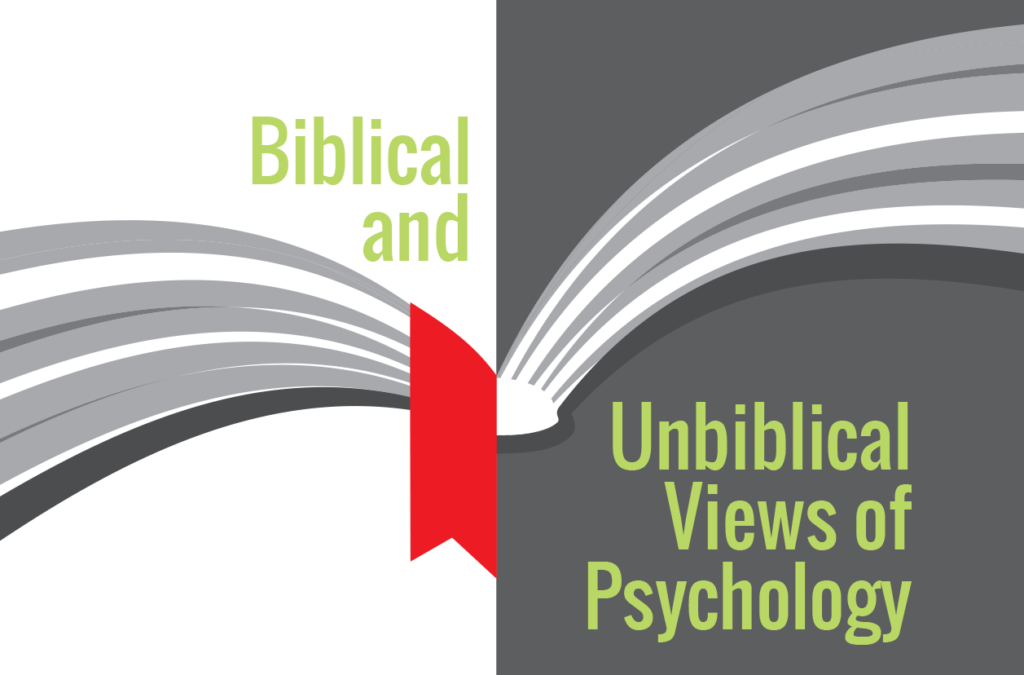 The new and unbiblical psychology has developed a whole new terminology. Most of it has the purpose of replacing the ideas of a sin nature and being in bondage to lust. The word disease is the most common. A disease removes the main idea of original sin. Addiction is another replacement word. Although there are real addictions, used in this context the word suggests helplessness and innocence. It can go as far as replacing the word idolatry with addiction.

Dysfunctional is another favorite substitute word for sin. People are coming from a dysfunctional home and have therefore acquired dysfunctional behavior. It’s not their fault; they are just victims. This is a much broader usage than just for the people who are genuine victims, and it’s meant to remove the personal responsibility and sinfulness.

People who use other people and try to control them are no longer guilty of self-glorification. They are sick with codependency.

Some words have become familiar to Christians, because these words sound so Christian. The word brokenness is one of them. This word is not in the Bible and is used in a different way than the original Christian meaning. Another word is self-esteem, which replaces the healthy word self-confidence, which really should be called “fear of the Lord.” One can be confident in Christ, but self-esteem is something a person needs to work on in order to achieve it.

All these words are meant to avoid the word sin. Sin is not a virus we catch from someone else. Nor is it a character role imposed on us by outside forces. It is our very nature outside Christ, and we need to acknowledge it at all times. We cannot avoid responsibility for our sin, even if others have treated us badly. One does not come to Christ complaining that others have forced us to become sinners against our will. Failure to take sin seriously will weaken every other aspect of our understanding and worship of God. We need to realize that it is my sinfulness that is the only issue I must deal with at the cross.

Biblical language doesn’t lend itself to a pathologically defined society. It doesn’t give us license to feel and talk about the hurts and disappointments our defenseless psyches have had to suffer.

New psychology also has an unbiblical method. This is not a discussion about the how-to of any counseling or psychology profession. It is an attempt at pointing out that there are two kinds of approaches to psychology: the secular or the biblical approach.

The secular or humanistic approach has its roots in historical developments in the eighteenth and nineteenth centuries, like the Enlightenment, humanism, and Darwin’s theory of evolution. Within a few decades after the acceptance of Darwinism by the American intellectual community, practically every major seminary capitulated to liberalism. Within the new view of psychology as a science, new approaches and ways of counseling were developed. They were non-Christian and therefore based only on human ideas about our human problems. This means it’s opposite from the Christian approach, where faith in God and his Word are the central assumptions.

Victimization therapy, as favored by “Christian” or secular psychology, is not so much a spiritual process achieving spiritual goals by spiritual means as it is a rationalistic process seeking behavioral goals and using humanistic means. Even though any Bible-believing psychologist can use the methods thought out by humanistic psychology, at the root still lies the fundamental belief in either man or God as the ultimate authority.

By viewing people as victims first, psychology seriously inhibits our willingness to believe that the cross has the power to change a sinner, which in turn inhibits our willingness to call sinners to the cross as sinners under God’s condemnation. It is saying that nothing was your fault and you should first handle your trauma and only then you’ll feel the love of God. This is bypassing the meaning of Christ’s suffering and death.

This is how humanist reasoning goes: self-esteem and victimization are inseparably connected. My sense of self-worth is based on the way I was treated when I was growing up, especially by my parents and immediate family. My parents failed, and my self-esteem suffers because of this. If I ever hope to live my Christian life, I first need to deal with these childhood hurts and disappointments. I must dig them up and relive them emotionally. I need to understand how these hurts have kept me in bondage and have caused me to make “wrong choices.”

Following this process will never lead us to a deeper faith or a more intense Christian life. That’s because sin was never dealt with.

What should be taught is that the focus should be first and foremost on Jesus Christ and not on ourselves or our past. He is to be the center of our life, in the here and now. In him are all the treasures of knowledge (Col. 2:3), and every thought is to be brought into captivity to his lordship (2 Cor. 10:5). The Bible tells us the old is gone, finished, dead and over. We have been crucified with Christ and have been buried with him and raised to a new life.

Yes, people can be in bondage to sin, but the cross breaks that enslavement. This is the great liberating message of the New Testament. This has been the proclamation of the church for two thousand years, and we shouldn’t deny it.

Unbiblical psychology ultimately has a different goal. It strives first for better self-esteem, but it leaves us with a self-esteem that’s extremely fragile and always close to collapse. Any perceived offense can bring us down into depression. We see the fear of being offended throughout society nowadays. The next goal should be feeling comfortable in a person’s old (sinful) self. Through a system of behavioral changes, we learn to deal with our trauma and then can feel happy with ourselves again. This is a worldly happiness and leaves us with an emptiness that supposedly can be filled with God’s love, except that our sinful nature is not at all dealt with.

God and biblical counseling aim first for a stronger faith, which comes through trials. God values our faith too much to spare us the rigors of whatever will strengthen it. Our Lord despises a half-hearted faith that demands and takes but never wants to be tested. Yet this testing should not leave us considering ourselves victims, as if God had turned on us. If God disciplines us, we are to bring the pain of it to him so that we might be comforted and strengthened in our faith. Faith expresses itself in love and obedience. We will be rooted and built up in him, and it will provide the road back into the fold of God. Thus, our trials shouldn’t be excuses for sin; they should point us to God and strengthen us in our faith.

Another very important goal of the Christian faith is to be renewed. It is my opinion that the modern system of dealing with the old, traumatized self leaves one with an empty mental house, and the emptiness is not, or is insufficiently, filled with God’s Spirit. Jesus foresaw this, giving the warning in Matthew 12:43–45 (English Standard Version): “When the unclean spirit has gone out of a person, it passes through waterless places seeking rest, but finds none. Then it says, ‘I will return to my house from which I came.’ And when it comes, it finds the house empty, swept, and put in order. Then it goes and brings with it seven other spirits more evil than itself, and they enter and dwell there, and the last state of that person is worse than the first. So also will it be with this evil generation.”

The way to get a new self is, as Paul tells us in Ephesians 4:22–24, to put off your old self, which belongs to your former manner of life and is corrupt through deceitful desires, and to be renewed in the spirit of your minds, and to put on the new self, created after the likeness of God in true righteousness and holiness.

When we have put off our old self and are renewed in our mind, we experience God’s closeness to us which will give us (supernatural) joy. Paul’s thorn in the flesh was not removed, because God wanted Paul to experience that he had to live in God’s strength and power every moment of every day. Realizing that we too are doing all our works because he is giving us the strength, and that therefore we are doing it to God’s glory, will give us joy that is much more than worldly happiness. Patience in suffering is a spiritual gift. The mature believer is identified by the fruit of the Spirit, not by a behavior that works. A critical key for receiving this kind of favor is to focus on God’s kingdom in everything you do: Seek first the kingdom of God and his righteousness, and all these things shall be added to you (Matt. 6:33). Put the Lord first in your life, and learn to run joyfully the race with perseverance, in his strength.

Concluding, we can say that whereas unbiblical psychology wants to protect us from trials and make us feel complacent in ourselves, God wants to strengthen us through trials, and he wants our old selves to die so we can put on the new life in Christ. Please keep the fundamental differences in mind when you seek counsel or talk with others who are being counseled.

Mrs. Annemarieke Ryskamp was born and raised in the Netherlands. She graduated with a master’s degree in Dutch Language and Literature from Utrecht University and worked for the Dutch l’Abri and as a secondary school teacher at United World College in Singapore. She attends Dutton United Reformed Church (MI) where she leads various Bible study groups and mentor groups. She has two sons who are currently in graduate studies.
Biblical and Unbiblical Views of Psychology