Abram was a man who lived by faith. He had heard God’s calling in Ur, witnessed God’s faithfulness in Egypt, and seen God’s power in the battle against the kings of the East. Every time Abram went through a period of crisis, God was there to renew His promises. In the crisis of leaving home, God had promised Abram a new home; in the crisis of Lot choosing the fertile land, God promised Abram all the land; in the crisis of war, God promised to be Abram’s shield. It is interesting to note that God told Abram that everywhere the patriarch put his feet would one day be his. Then God has Abram pursue the kings of the East—forcing him to move his feet.

God’s promise to be Abram’s shield came as a comfort to Abram after he battled against the four kings from the East. Prior to the battle, the kings had not bothered to attack Abram because they considered him not worth their time. Certainly vengeance would be foremost on their minds after he had defeated them. God would be Abram’s shield against his enemies and for his future.

Comforted as he may have been by this assurance, Abram had other things on his mind. Ten years earlier, God had promised him offspring “like the dust of the earth.” He was seventy-five years old at the time. He was not getting any younger. Virtually all of the promises that God had given to Abram for the future depended on him having a son. Now it seemed as if one of his servants, Eliezer of Damascus, would inherit Abram’s estate.

Mindful of our human frailty, God does not chastise Abram saying, “I told you once already that you would have offspring!” Rather, God graciously repeats His promise. He assures Abram that Eliezer will not be the beneficiary of His promises, rather one coming from Abram’s own body, a son, would be his heir. Then, to reassure Abram of the depth of His promise, God takes him outside on what must have been a very clear night and encourages him to count the stars. “So shall your offspring be,” God promised.

Romans 4 tells us that Abram faced the fact that his body was as good as dead. He was, after all, about a hundred years old. He faced the fact that Sarai’s womb was also dead. Yet God had promised that a son would be born from his own body, and his descendants would be as numerous as the stars in the sky. As Abram looked up he realized that he could not count the stars—but God could. In fact, God not only knows the number of stars in the sky, He has given a name to each one of them (Psalm 147:4). On that clear night, and every subsequent clear night, Abram would be reminded of the great promise that God had given to him.

With this introduction—God as Abram’s shield; God’s great promise; the starry night—we read these words: “Abram believed the Lord, and He credited it to him as righteousness” (Genesis 15:16). Read that verse and read it again. Commit it to memory. Paul quotes this verse twice—once in Romans 4:6 and again in Galatians 3:6. James looks back upon it in James 2:23. This is a pivotal verse, for it introduces us to the glorious truth of justification by grace through faith. Martin Luther wrote that the church stands or falls through its understanding of this verse. John Calvin said that this truth is the main hinge upon which all religion turns.

The ultimate question in the life of Abram (and in the life of every human being) was whether he believed the promises God had given. Many people today think that they need only to believe in God and they will be saved. Without a doubt, Abram believed in God. That is not what saved him! James points out that even the demons believe in God (James 2:19). According to Mark, the demons were among the first to acknowledge that Jesus was the Son of God (Mark 1:24, 3:11). Adam and Eve believed in God, but that did not keep them from eating the fruit of the forbidden tree. It is not enough to know that there is an Intelligent Designer of the universe; we must know who He is and how we can be restored to a right relationship with Him. 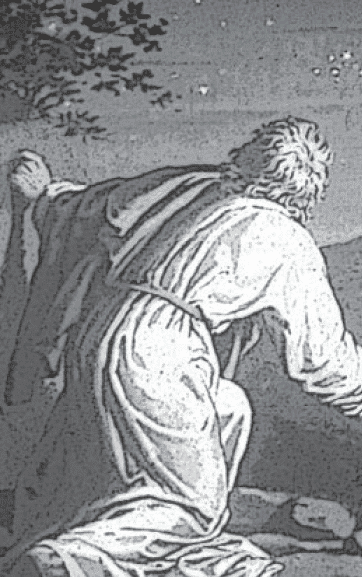 What Abram (and everyone before and after him) needed to believe was the gospel promise. It was not just the new land or an earthly child from his own body that Abram had to believe; it was that every nation would be blessed by him (Galatians 3:8). Abram had to believe that through his son would come the Messiah. Three times God promised Abram that his seed would be a blessing to those who blessed him. In that promise, the word “seed” is singular. Although his offspring would be as numerous as the stars in the sky, Abram had to believe that from among them would come one who would restore things as they once were in the garden of Eden where mankind enjoyed complete fellowship with God. One would come who would save His people from their sin. Jesus said, “Abraham rejoiced at the thought of seeing My day; he saw it and was glad” (John 8:56).

Paul encourages his readers to follow the example of Abram (Romans 4:18–25). In order to do that, we have to understand three very important words:

True faith is focused upon a statement, a doctrine, and a promise. The statement is that Jesus Christ is the Son of God who died, rose again, and now sits at the right hand of God the Father. The doctrine is that the death of Jesus Christ was the all-sufficient sacrifice given once for all for all your sins. The promise is that your sins are forgiven and the righteousness of Jesus Christ has been imputed to all who truly repent of their sins and shelter themselves in the atoning sacrifice of Jesus Christ.

Credited. People who maintain a checkbook understand what this term means. Suppose you have written a number of checks and suddenly find yourself $100 short in your checking account. There are a number of things you can do. You can close the checkbook and pretend nothing is wrong. That would certainly be ineffective. You could write a deposit of $100 into the deposit column so that everything in the checkbook balances. While that may look good, unless you actually deposit the $100 your checks will not be covered. You must actually go to the bank and credit your account with $100 or the checks you have written will not be cleared.

As people created in His image, we are called by God to be righteous—without sin. Yet the Bible very clearly teaches that no one is without sin (Romans 3:10; 1 John 1:8). Putting our sin in banking terms, we have written bad checks against our account with God. In fact, the Heidelberg Catechism teaches us that we increase our guilt (debt) every day. Nevertheless the Psalmist writes, “Blessed is the man whose sin the Lord does not count against him” (Psalm 32:2). This verse speaks of a sinful person, yet, the Lord does not look at his negative balance.

What happened to that negative balance? What happened to our sin? Surely God does not just forget about our sin. God’s justice demands that sin be punished. While the penalty for insufficient funds at the bank may involve overdraft fees, Paul wrote that the penalty against us because of our sin is death (Romans 6:23). Someone has to die for our sin. Either we have to die, or we must find a suitable substitute. That Substitute is Jesus, the Son of God. When our faith is in the substitutionary sacrifice of Jesus Christ, God takes our sin and charges them to the account of His Son. Jesus paid sin’s penalty when He died on the cross. God takes our filthy deeds and removes them from our account and placed them in Christ’s account.

Righteousness. This term focuses our attention upon our standing before God. God will not permit sin to stand in His presence. If we are to have a positive relationship with God, He must view us as being without sin. If we are left to ourselves, that is impossible; even our best deeds are like filthy rags in His sight. We cannot be righteous; we must be declared righteous by a gracious God. Even as our sin was imputed to Jesus Christ as our substitute, so also His righteousness was imputed to us. God, in His great love, credits those who have faith in His Son’s sacrifice with the perfect righteousness of His perfect Son.

Abram was not righteous because he lived a perfect life. He was and remained a sinner all his life. Nor was he righteous because he knew God and the promises of God. He did not become righteous because of his faith. Because Abram believed that God was able to bring life out of death, the Sovereign God credited Abram’s faith to him and declared Abram righteous. Salvation, even in Abram’s case, was not of works but of grace—grace freely given by God who implanted a true faith into Abram.

Abram no longer looked at the promise; he was looking at the Giver of the promise. He saw God as the shield that would protect him not only against his earthly enemies, but the shield that would guard him against Satan. Today we have the fulfillment of that promise! We can believe that our sins are forgiven and eternal life is ours because of the sacrifice made by God’s Son, Jesus Christ. His shed blood covered our sin. His righteousness is imputed to all who truly trust in the work He accomplished at Calvary. We have not only the Word of God; we have the Word of God made flesh.

Rev. Wybren Oord recently moved from Kalamazoo, Michigan to serve as co-pastor at the Trinity Reformed Church in Lethbridge, Alberta. He is also the editor of The Outlook.

1. In what way is God a shield for His people today?

2. Why would being childless have been a major concern for Abram?

3. What unspoken questions were behind Abram’s concern?

4. Why would it have required faith to believe the promises of Genesis 15:4, 5?

6. In what way does Abram’s faith in God become a model for us today?

7. Explain in your own words what you understand by the words “faith,” “credited,” and “righteousness.”

8. What did Abram believe?

9. What must we believe?