It the end of Romans 14, Paul has finished the official teaching part of his epistle to the church that meets in Rome. Having laid out the full doctrine of salvation, Paul appears almost hesitant to end the epistle. He seems to close the epistle four times (Rom. 15:5; 15:13; 15:33; 16:26–27). His conclusion, however, is not a haphazard collection of thoughts and salutations. It is composed to remind the believers in Rome that while their church may be far away, it is not alone in the world. Paul seeks to remind them of their identity in Christ Jesus and commends them for their faith.

Paul seeks to bring glory to Christ in his service to God. Indeed, if there is anything in which we as Christians are to glory it is in the privilege of being in service to God. Mind you, we are not to glory in works of service themselves. Instead, we should be grateful for the honor that God bestows upon us that we should be able to serve him. The word that is used in verse 17 refers to the feeling of satisfaction a person receives in an object or action. In other words, Paul seeks to boast in Christ Jesus.

People find many things to boast about. The psalmist points out that “some boast in chariots and some in horses” (20:7). Jeremiah writes of those who boast in wisdom, strength, and riches (Jer. 9:23). Things certainly have not changed. We still boast in our possessions and our abilities. Behind all such boasting is self-glorification. The sinner who glories in what he has commits idolatry because he does not recognize God as the author and source of all that he has received. The same is true for the person who boasts in his abilities. Those, too, are gifts from God.

Paul also could have found many things to boast about. Prior to his conversion he had great cause to boast in the flesh—a Hebrew’s Hebrew who considered himself righteous and flawless (Phil. 3:4–6). All this he considered as worthless when compared to the surpassing greatness of knowing Christ Jesus. After his conversion, Paul could have boasted in the churches he established or the trials he faced while working for the kingdom (2 Cor. 11:24–28).

Paul, however, has found something else to boast in: his tribulations (Rom. 5:3); his infirmities (2 Cor. 11:30); and, above all, the cross (Gal. 6:14). In this passage, he mentions Gentiles who came to Christ, signs and miracles, and the honor of preaching Christ from Jerusalem all the way to Illyricum. Yet in all of these things, Paul takes no credit for himself.

Paul boasts in them because the glory of God’s grace comes to expression through them. As he looks back on his ministry, he sees himself as nothing more than a servant in service to his King, entrusting to him his work as an offering of praise to his Lord. For all his labors, Paul responded to his work as the servants in Luke 17:10: “So you also, when you have done everything you were told to do, should say, ‘We are unworthy servants; we have only done our duty.’”

Jesus did not say, “Apart from me you cannot do very much.” He said, “Apart from me you can do nothing” (John 15:5). How necessary for Christians to turn our lives completely over to Jesus Christ. Only when we focus ourselves on the cross will the Holy Spirit truly use us for his glory. It is then that our lives become transformed by the Holy Spirit. Only through the Spirit will the work that we do be done to the glory of God. The widow we visit, the lunch we bring to the shut-in, and the singing we do at the retirement home all take on their fullest meaning when we do them to God’s glory rather than our own. The same is true of our labors. Whether we preach the gospel or dig ditches, when we do our work to bring glory to God, we do not do it in vain. It becomes a sacrifice of praise to our King.

The Gospel of Christ

Several years ago, while on vacation, I was asked to lead a worship service. After the service, an elder thanked me for the message I had delivered. His comment: “We haven’t heard the gospel in a long time here.” I have listened to and read sermons by a variety of ministers from a variety of denominations and federations. Many of them are Old Testament history lessons, how-to sermons, and expressions designed to give warm—but empty—feelings. Others cast the listeners into the depths of hell without any hope of recovery.

I have had discussions with ministers who have been told by their elders to preach less doctrine. Doctrine can be defined simply as “a statement of a truth.” When a minister proclaims the Word of God, one would hope that he is making statements of truth! In most cases, the problem is not that the minister is preaching doctrine. It is more than likely he is focused on a particular doctrine (often sin) to the neglect of the gospel. 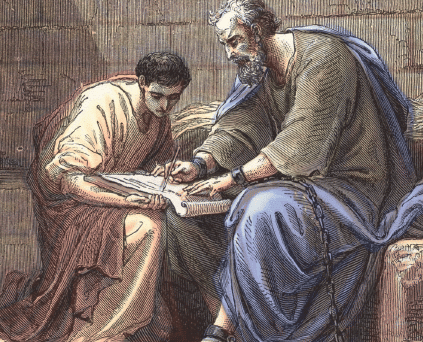 Paul, on the other hand, was unashamed to preach the full gospel of Christ. He knew that the gospel contained the power of God unto salvation (Rom. 1:16). No doctrine was omitted in his preaching as he performed his priestly duty to the Gentiles. The glory he sought was not for himself but for his Savior. Notice the humility that Paul expresses in Romans 15:18. His focus is not what “I did through Christ” but what “Christ accomplished through me.”

Through the power of the Holy Spirit, Paul was able to accomplish great things. Led by the Spirit, he was able to establish churches and produce conviction and obedience of faith in the minds of many Gentiles.

Paul’s Plans for the Future

Immersed in his work for the kingdom, Paul had little opportunity to visit the church in Rome. By the grace of God, he was able to establish a variety of churches on several missionary trips. Feeling led by the Lord to establish a church in Spain, Paul saw opportunity to visit Rome for spiritual nourishment while heading west. Before he could begin that journey, he had to bring the offering from the Gentiles to the poor in Jerusalem.

In light of the dangers he would face, Paul asks the church for their prayers. He asks for protection against the enemies in Judea, that the gift the Greek churches gave to Jerusalem be received, and that he may arrive safely in Rome to fellowship with the believers there.

While in Rome, Paul anticipated collecting contributions for the relief of their Jewish counterparts in Jerusalem. The generous gifts of the churches in Macedonia and Achaia were given to Jerusalem to provide relief for the poor families that were going through a famine that had come upon the city. They were also given as a token of gratitude for the gift of the gospel they had received.

While the benefits of the offering would be material in nature, the Jews in Jerusalem would also become more aware of the genuine faith given by grace to the Gentiles. They would witness firsthand how Christ was effecting the Gentiles’ behavior and be more ready to receive them as fellow believers in Jesus Christ.

In the providence of God, Paul did get to visit Rome, although not as he expected. He traveled in chains a few years later as a prisoner. After Paul delivered the gifts that had been collected from the churches to Jerusalem, the Judeans laid false charges upon him, and he was arrested. He was placed in protective custody after a failed assassination attempt. Finally, after several hearings, Paul exercised his right as a Roman citizen to have his case heard in the capital city of the empire (Acts 21–26).

The chapter ends with the words, “The God of peace be with you all. Amen” (v. 33). The peace that God gives is the hope that delivers us out of the worries of the day into the victory that is ours in Christ Jesus. Through him we have peace with God. In that peace we have the comfort of knowing that we can boldly face the trials that come our way. In addition, we have the knowledge that our sins are completely forgiven and eternal life awaits us in heaven. How trivial become the temporal things of this world when our focus is on that which is eternal.

Rev. Wybren Oordis the co-pastor of Trinity United Reformed Church in Lethbridge, AB, and the editor of The Outlook.