In this chapter Paul continues to write about the relationship that fellow believers ought to have with one another. Whereas in the previous chapter Paul wrote about matters that divide strong and weak Christians, he now moves on to that which should unite us. Both chapters, of course, hinge on our union with Christ.

Too often those who consider themselves to be stronger Christians believe they have more insight and want to impose their views on those whom they consider weaker brothers in Christ. We can see this happen among siblings—when parents are not around, the stronger child decides what to watch on television and which toys are his. A true example of the fact that our children are totally depraved is that one of the first words they learn to say is “Mine!” As Paul points out, we seek to please ourselves.

It happens in the church as well. Arguments arise over matters that are often insignificant. How much easier it would be if everyone in the church would simply think alike, worship alike, dress alike, and live alike—that is, how much easier if they would all think the way I do. Such is the mind-set of many Christians. Instead of building one another up in Christ, we divide ourselves, claiming one view to be superior over another. “We are the church that uses disposable cups at Communion.” “We are the church that won’t have coffee after the service.” “We are the church that will not have special music.” Years ago, I attended a meeting where people expressed their concern about the direction a particular denomination was taking. One person at the meeting declared that any church that bought the new hymnbook being produced by the denomination was a false church. You will notice very quickly, I hope, that none of these issues have anything to do with the gospel.

Paul encourages believers to build one another up in the one thing that does matter: our hope in Christ. Each member of the body has much to offer to other believers. In fact, even those who consider themselves strong in the faith often have weak areas. We all have blinders of some sort. For example, I have found that many parents are highly critical of how other parents raise their children. Yet they have blind spots in certain areas when it comes to raising their own children. I have a friend who lectures on the evils of pornography but watches movies that are filled with violence and sexual innuendo. Because all Christians have blinders in different areas of their lives, Paul urges the believers to strengthen one another in the faith.

The Example of Christ

As Reformed believers, we place a strong emphasis on Jesus Christ as our all-sufficient Savior. His once-for-all sacrifice on the cross is all we need for salvation. Through him the fullness of God’s grace is poured out and applied to our lives. With grateful hearts we bow down on our knees and confess with our tongues that he is Lord. Our desire is to serve him according to his Word and his will for our lives.

Often we place so much emphasis on the efficacy of Christ’s sacrifice for our redemption that we bypass his role as our example. In fact, we avoid it. We have heard too many sermons in which we missed the cross and were only compelled to follow the example of Jesus. The two, however, go hand in hand. Jesus suffered as he did because of his love and concern for the lost. Paul exhorts us in Philippians to follow the example of Christ, “who, being in very nature God, . . . made Himself nothing. . . . He humbled Himself and became obedient to death” (Phil. 2:6–8). Following the humility of Christ, those who consider themselves to be strong Christians are to live alongside those who may be weaker in the faith. Paul insists that all Christians are called to mutual submission to one another out of their love for Jesus Christ.

Paul exhorts believers to follow the example of Christ, who was motivated by a consuming love for the glory and honor of his Father and by the steadfast desire to give himself for the salvation of his people. Psalm 69 addresses the suffering of Israel, and Paul quotes from it to illustrate the Savior’s zeal. Christ’s desire was not to please himself. Rather, he came to do the Father’s will, not for his own ease or convenience but for the fulfillment of God’s promises and the redemption of sinners. He came into the world to accomplish the self-emptying sacrifice that would provide the believer freedom from sin’s bondage. 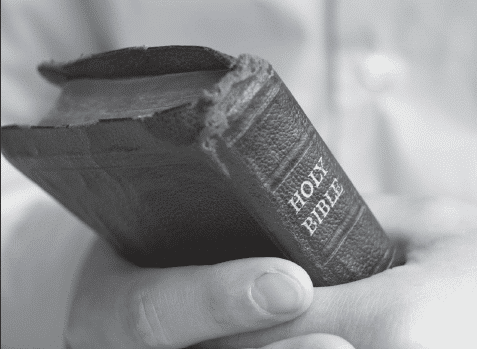 With the Bible in our hands—both Old and New Testaments—the Holy Spirit encourages us to live in joy and peace as we trust in God. Herein rests our hope as we look forward to the consummation of the ages.

Far from being outdated, the books of the Old Testament were given to teach us and to give us hope. As we live from day to day, Christians often forget that our religion is one of hope. Those who live in comfort today forget that the Lord encourages us to look to the future for which he is preparing us. The Israelites endured their bondage to Egypt by living in the hope of deliverance that God had promised Abraham (Gen. 15:13–14). In the wilderness their hope was in the promise of a land flowing with milk and honey. In the land of Canaan their hope was in the coming of the Messiah. They were ever looking forward in the Old Testament, and Paul directs the New Testament church to do the same—look forward in the hope of his appearing.

The Ministry of Christ

The Jews expected the Messiah to reign over them and the world. He would establish his throne in Jerusalem and become the sovereign ruler over all nations. That certainly will take place when the Lord comes again. In order to do that, however, he first had to give himself in service for the redemption of his people. By his incarnation, the Second Person of the Trinity was made a minister in order to become a servant.

As such, he came first to the Jews in order to “confirm the promises made to the patriarchs” (v. 8). From Genesis 3:15 until the close of Malachi, salvation was promised to the Jews. Christ came and fulfilled that promise through his humiliation, his atoning sacrifice, and his death. All were part of the prophesies and promises given to the patriarchs concerning the coming deliverer. All were fulfilled in Jesus of Nazareth.

Because of what they expected the Messiah to be, the Jews failed to see the promises fulfilled. Their view of a king was wrong. Instead of coming to rule over them, the Messiah came to serve for the benefit of his people. Many politicians—and, sadly, many elders—have adopted the New Testament Jewish view of authority. They see their role as rulers when they are called to be servants. With Christ as our example, we are called as Christians to care for the flock for the glory of God.

Paul continues the chapter by quoting several passages from the Old Testament that teach that although the saving work of Christ came first to the Jews, it was not intended solely for them. The salvation of the Gentiles was always a part of the great redemption plan. In verse 9, Paul quotes from Psalm 18, in which David confesses and praises God among the Gentiles, showing that the knowledge of God and his saving work would be extended to them as well. Similar truths are expressed in verse 10 in the quote from Deuteronomy 32:43, although John Calvin believes Paul is quoting Psalm 67:3, 5 here. The sense is that the ministry of Christ includes the Gentiles since they, too, will rejoice with God’s people as they have been called to share in the riches of God’s grace with his people.

The third quote, in verse 11, from Psalm 117, pictures the Gentiles being called as God’s people to praise him as they acknowledge his salvation. And finally, in verse 12, from Isaiah Paul points out that the Messiah would spring from the house of Jesse as ruler over the Gentiles who place their hope in him. Indeed, in Jesus Christ is the hope of all nations, Jews and Gentiles alike. Where the descendants of Abraham failed in displaying the grace they received and where the kings of Israel disobeyed God and served other gods, Jesus Christ succeeded. He revealed the righteousness, love, and grace of God.

The God of all hope fills Jews and Gentiles alike with joy and peace. Led by the Holy Spirit, we ought to be able to live in harmony and unity with our brothers and sisters in Christ. Living in harmony and being likeminded does not mean unanimity in all things or uniformity. We may disagree on matters of insignificance. However, we must never forget that which keeps us together—we are called to be servants and followers of Jesus Christ. We must be united in our love for Christ and our love for one another. That’s the bottom line! How often we get caught up in insignificant details and forget the rich calling that has been given to us. Our calling is to promote one another’s welfare and spiritual edification to the glory of God.

a. Jesus’ suffering was our example.

b. Jesus suffered to atone for our sin.

Are these views mutually exclusive? How can we benefit from both?