The youngest child took the last lick of icc cream from his spoon. Father reached for the Bible story book and opened it to where he had left off at the last reading. “In the city of Capernaum there was a very sick man. He lay on his bed all the time. He could not get up and walk.” Within a few more sentences it became obvious that this was the account of the invalid who was let down through the roof into the very presence of Jesus. Then six-year old sprang up. “Oh, I know this one!” And without hesitation he rattled off the subsequent details of the story, scarcely aware of the rich implications of this miracle.

Was he, at the age of six, too familiar with this, and other Bible stories? Had he already—at the table, in Sunday School, at the Christian school heard the great events of Bible history so often that he had lost the wonderment and awe which the mighty acts of God should evoke? Or had he, perhaps, become too well acquainted with the details of the narrative before he was capable of appreciating the deeper significance? Certainly the danger was there. And how about when he is ten and fifteen?

Are we, therefore, to conclude that we should refrain from reading these stories at the table until the children, with a fresh vision, are old enough to comprehend the full spiritual implications of them? Should we keep them from Sunday School and, above all, from the Christian School, lest the manna become monotonous and therefore distasteful? For we have seen, have we not, example after example of persons converted after they came of age who seemed to have a more vibrant enthusiasm for the gospel than many who have grown lip in a solid Christian home?

Undoubtedly we have. Yet there are probably as many cases, if not more, of those who, because they did not hear these stories when young, never heard them and never believed. God’s words to the children of Israel are just as applicable to us today: “And ye shall teach them [His words] to your children, talking of them, when thou sittest in thy house, and when thou walkest by the way, and when thou liest down, and when thou risest up.” We may not judge our ways to be wiser than God’s ways and withhold his Word from those souls entrusted to us in the hope that they will appreciate it that much more at a later time. What a risk! We are not just experimenting to see if plants can grow without the sun and, if they cannot, then conclude that our experiment has failed and we should try something else. The seedlings which God has placed in our care are for eternity. 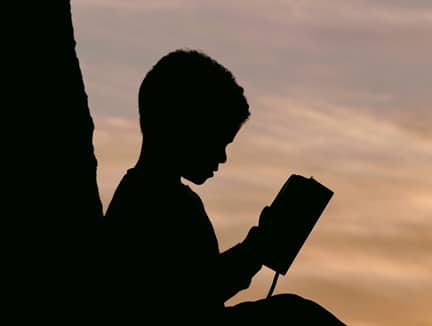 Then what is the solution? How can we “instruct and cause to be instructed” without incurring the danger of contempt bred by familiarity?

One practical answer is the use of different Bible story books. We may include here Sunday School lessons which have been saved for re-use a year or so later. No two authors, of course, will present identical stories in exactly the same way. A difference in the selection of stories, in the emphasis and details given, as well as in the wording itself, lends a certain amount of freshness to the subject matter. We, as adults, have probably experienced the same eye-opening when we have read familiar parts of Scripture in a different translation, or, better still, in a different language. A new phraSing of a well-known passage can sometimes jar us out of the mental and spiritual stupor induced by always knowing what comes next. What we have read fifty times takes on new and richer meaning when we read it for the fifty-first time in a new version.

Another aid is the frequent interruption of the reading for questions and comments. Nothing dulls the mind so much as a voice droning on uninterruptedly. Ask the children, for example, how the men got up on the roof to let the invalid down. \Vas it a roof such as we have on our houses? Where did the rope come from? Have them imagine what it would be like if their own living room, dining room, etc., were so filled with people that no one could even push his way through, and if crowds were even peering through the windows so that no entrance could be made that way either. The more they use their own imaginations the more vivid will the events be for them.

A third means of enlivening the stories is acting them out. This can be done either in miniature, on the dining room or kitchen table, or in real life. In the story of Gideon’s conquest of the Midianites, for example, a large plate can serve as the camp of the Midianites. Salt and pepper shakers, glasses, and cups can be arrayed around the “camp” as Gideon’s men. A glass or pitcher inverted over a fork can be the torch and pitcher, and as for the trumpet, any child can give a trumpet-blast through a cupped hand. As unrealistic and unconvincing as such a battle might seem to us adults, we must remember that a. child’s keen imagination can transform it into living action.

Other stories can be acted out by the children themselves with a few simple props. A scatter rug makes a very suitable boat in which a few “disciples” can sail on the Galilean lake, and much rocking back and forth can soon give the impression of a bad storm. As Jesus comes· walking upon the “water,” Peter can climb over the “sides” of the boat and go towards Jesus until he crumples to his knees as he “sinks.” After Jesus rescues Peter and the two return to the boat, the rocking may cease as the storm is suddenly over.

These are but two concrete examples of the many stories which can profitably be acted out. Naturally, not everyone lends itself to dramatization, but those which do will long remain imprinted on the child’s me· mary. Moreover, it need not be only those stories which we consider to be the very dramatic ones, because, again, a child’s vivid imagination will receive much profit from even the Simplest action.

A fourth and final help is for the child to incorporate something of the story into his prayer. If the prayer is only one sentence, such as, “I thank thee that Jesus could walk on the water because he is God,” it will be more meaningful than ten sentences of “vain repetitions.” In that way, not only will he listen more attentively to the story in order to find prayer matter, but also he will learn to make supplication with thanksgiving in relation to Scripture.

Now all of this, of course, takes time and effort. It is not for those who want to “make it a short one tonight.” But as with everything, the more energy that is expended, the more rewarding are the results.