“If anyone would come after me, let him deny himself and take up his cross and follow me.” 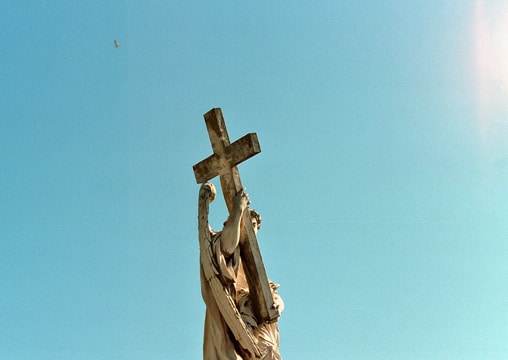 In the telling of Mark’s gospel account, chapter 8 provides a turning point. From chapter 1 to chapter 6 the ministry of Jesus centers on the region of Galilee. As a member of the covenant community, the Lord first declared the good news of God’s promised redemption to His people. Despite this blessing, however, not everyone accepted our Lord’s ministry. Some, in particular the Pharisees and the scribes, resisted the message of the gospel, that is, that salvation comes through Jesus, the Messiah.

The tension this message created between Jesus and the leaders of the Jews grew increasingly strong. In chapter 7, we read of an exchange between Jesus and these men in which our Lord condemns the way they reject the law of God in favor of their own commandments. Quoting the prophet Isaiah, Jesus described these leaders as men who “honor me with their lips, but their heart is far from me.” Denying the radical nature of sin, these leaders of the Jews did not seek a radical redemption from God. Over against this trite view of sin, Jesus proclaimed the true depth of our misery.

In opposition to the superficial piety of the Pharisees, the Lord pinpoints the source of man’s uncleanness in God’s sight. “There is nothing outside a person that by going into him can defile him, but the things that come out of a person are what defile him.” Because sin is so deeply rooted in us, cosmetic piety cannot resolve our sin. As any gardener knows, the way to remove a weed is by its roots. Only a radical reformation can deliver fallen man from his rebellious ways. In this way, the gospel’s proclamation of redemption in Jesus Christ is quite humbling.

In light of our own struggle with this humbling assessment of our condition, we should not be surprised that the Pharisees persisted in denying Jesus’ claim to be the Messiah. In chapter 8:11 we read, “The Pharisees came and began to argue with Him, seeking from Him a sign from heaven to test Him.” Rather then submitting to the Messiah out of an appreciation for their sinful condition, these leaders of the Jews argued with the Sent One who alone can save. Yet, before we wag our fingers at the leaders of the Jews, we should be struck by the fact that our Lord also warns His disciples against such presumption.

In chapter 8:15 Jesus says to His chosen disciples, “Watch out for the yeast of the Pharisees and that of Herod.” In order to understand the significance of this warning it is helpful to understand why Jesus unites the Pharisees and Herod in His warning. The equating of these two disparate persons reveals what it is the disciples were to avoid. Herod, as Mark records for us, rejected the command to submit to God in his life. It was Herod who imprisoned John the Baptist after John had condemned Herod’s adulterous marriage. Rather than repent of his rebellion against God’s law, Herod removed the one calling him to repentance. Thus, Herod’s name in Mark’s gospel is associated with a refusal to bow before the Lord in humble obedience. The Pharisees present a similar spirit in their persistent refusal to accept Jesus as the Christ. But was this really something the disciples were in danger of doing?

Soon after this warning Jesus asks His disciples “Who do people say that I am?” The disciples give a number of answers. Then Jesus says, “But what about you? Who do you say I am?” In response, Peter, on behalf of the disciples, makes the good confession. Peter declares, “You are the Christ.” This was the very confession the leaders of the Jews refused to make. Surely then the disciples were not in danger of the leaven of the Pharisees.

Yet consider the full significance of this confession. To identify someone as your sovereign is to declare that one ruler of your life. If you identify someone as master, you by that fact identify yourself as servant. If you say, “That is my boss” you also declare, “I am his employee.” Describing someone as Lord, therefore, is also a self-description. Thus, not to submit to that sovereign’s rule is hypocrisy. It is to be like the son who promised to fulfill his father’s request but did not (Matthew 21:28–32). To suggest that Jesus is the Christ and yet fail to bow in submission to Him is a total contradiction (Matthew 7:15–23). Either Jesus is the Christ, and therefore we are citizens of His Kingdom, or we reject His rule and refuse to acknowledge Him as the Christ. It must not be one or the other.

In light of this consider that this same Peter, who made the good confession faith in Mark 8:29, rebukes Jesus in Mark 8:32. The context of that rebuke is the words of our Lord when He “began to teach His disciples that the Son of Man must suffer many things and be rejected by the elders and the chief priests and the scribes and be killed, and after three days rise again.” (Mark 8:31). Because of the humbling description of our Lord’s pathway, Peter rebuked Him. The simple explanation for this is that while Peter confessed that Jesus was the Christ, Peter did not yet appreciate the full significance of that confession. And in this Peter is not alone.

If the problem of man is man, that is, if man’s sinfulness proceeds from who he is, expressing itself in what he does, then what is the only solution for such a problem? Is it enough to alter such a man’s habits? Can salvation work from the outside in? Or, is it enough to alter man’s mind and teach him new patterns of thinking? Can the mind of man change the heart of man? Since the problem is man’s sinful self, then surely the solution is to do away with this sinful self and replace it with a new man. Radical sin requires a radical redemption. And this is precisely what Jesus teaches.

When Jesus says to those gathered around Him, “If anyone would come after me, let him deny himself and take up his cross and follow me,” He is describing how radical redemption truly is. Just listen to our Lord’s words from the point of view of those who heard these words for the first time.

We have smoothed the rough edges from this declaration of our Lord by identifying ‘cross bearing’ as the bearing of personal burdens and struggles. In Dutch, there is a saying that “every house has its cross” (it rhymes in Dutch). The meaning is this; each home has its unique burdens and challenges to carry through life. For some it might be the responsibility of caring for elderly parents. For others it might a sick child. For some it might be a personal struggle. Whatever the case, each home has its burdens. And while this is true, for who can deny it, this is not at all what Jesus is saying. The words of our Lord are far more challenging.

Think of the Electric Chair, the Hang Man’s Noose and the Guillotine and you have something of the significance of a Roman cross. The cross was an object of torture, a scandalous death reserved for the worst of criminals, intended to inflict maximum pain and suffering. When we think of the cross, we immediately think of it in terms of Golgotha and the death of Jesus Christ. The cross does not have the same connotation for us as it did for those people. Consequently, we can well imagine those people, hearing Jesus describe the cost of discipleship, would have been shocked. Indeed, they may have thought such a teaching contradictory.

The reason you follow someone is in order to improve your life. A great teacher or a wise leader helps you achieve your full potential. A leader is someone moves you from where you are to where you need to be. The appeal of an inspirational speaker or a dynamic leader is how he motivates you.

How motivating is a call to experience the awful death of a Roman cross? The call of our Lord to “lose our lives” is more likely to keep people away than to draw them in. Christianity should inspire us to improve our lives, not become depressed about them.

To be sure, all of us know that we are not perfect. No one claims to be without error or defect. Even if we explain away our failings, we are still acknowledging that they exist. But do we appreciate how totally lost we are? When our sinfulness is a series of bad habits, the solution to our problem is a twelve-step program. When our sinfulness is ignorance or failure to consider the whole picture, then learning and instruction is our solution. But what if our problem is so radical, so deeply ingrained, and so bred-in-the-bone that nothing we do can excise it? What if the only way to deal with our sin is through dying to our sinful selves?

Yet even if we accept that this is necessary, that is, that character of our sinfulness is such that we need to be radically reformed in order to be free, how can we possible achieve such a goal? How can we die to our sinful selves and still live to tell about it? The answer is, we cannot. That is precisely why Jesus came in the flesh; to accomplish what we could not. In His flesh, our Lord has done all that is necessary for salvation. That salvation comes by Jesus’ taking up His cross in obedience to our heavenly Father. By His cross bearing our salvation has come. And for that we give thanks. Not in selfishness, grateful that someone else (and not we) did this for us, but in thanksgiving that in His death we also find victory over our sin.

The call of faith in Jesus Christ is not a call to some medicine, example, or instruction. The call of faith in Jesus Christ is the call to die to sin and to judgment. The cross we are to pick up in our following of Jesus is the cross of Calvary. Embracing that condemnation of our sins, we are to recognize that only in the cross are we delivered from this body of death. As the Apostle Paul writes, “We know that our old self was crucified with Him in order that the body of sin might be brought to nothing, so that we would no longer be enslaved to sin. For one who has died has been set free from sin.” (Romans 6:6-7). By embracing the cross of Calvary as our redemption, this is what we are embracing. In Jesus Christ we are dead to our old nature, dead to sin, and dead to the way into which we were born. In Jesus Christ we are alive to God and to righteousness and to obedience. A radical problem requires a radical redemption. In Christ, we are radically changed.

In many presentations of the gospel the leaven of the Pharisees has become standard fare. Superficial piety, simple tricks, and external righteousness are accepted and applauded as the way to go. We would have more application, more practical advice on how to live the Christian life, more concrete examples that we can use. The evidence is all around us; in book stores, on Christian TV, and on the pulpits of our land. Give someone a bit of direction on how to improve their marriage and people are grateful. Call them to radical surrender to the saving power of Jesus Christ and they think you are a little off. Superficial piety is still in vogue. But cross bearing is still the only way to salvation.

Rev. Joel Dykstra is the pastor of the Wellandport Orthodox Reformed Church in Wellandport, Ontario Canada.