Past generations had heroes—in part because there were more heroes to be had. This was back in the day when astronauts walked the earth (and moon!), when baseball players stayed married to one woman (most of the time), and when being a politician meant you were serving your country rather than being served (with some exceptions).

Young people don’t have heroes anymore—or least not as many. And often the people they want to be like are anything but heroic. Our athletes cheat, our politicians get caught having affairs, and our movie stars go to rehab when they aren’t working. There are lots of exceptions, of course, but you get the general idea. I might be wrong, but I don’t think the shallow hero pool is the only reason youth don’t have heroes like they used to. I’m persuaded that young people don’t have as much interest, in general, in seeking out people to follow. And this is a problem.

Young people are smarter than they used to be—at least, that’s what they often think. Don’t know the answer to a question? Hold on, let me Google that. You’ve got information literally at your fingertips. Unlike previous generations, you can learn almost anything in a matter of minutes with the simple click of a mouse.

Anything, that is, except wisdom.

That you can’t Google. You can learn how to change a tire on YouTube, find out the migration habits of Canadian waterfowl on Wikipedia (whose trustworthiness is questionable), or compare the world religions by doing a quick search. But the Internet can’t show you what it means to be a loving, caring husband or wife. Google can’t teach you how to show forgiveness or what Christian maturity looks like in real life. Surfing the Internet won’t provide you with a living, breathing, tangible example of how to deal with suffering or how to love your local church. Knowledge and wisdom are not the same things, which is why I believing mentoring is indispensable. My purpose in this edition of “The Next Generation” is to educate you about the practice of mentoring and then to exhort you to seek out mentors. But first, a personal anecdote: I’m writing as one who has been the beneficiary of many mentors. 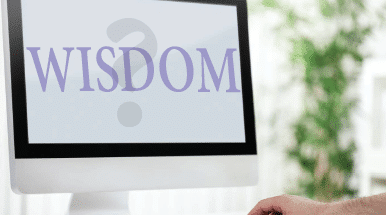 In fact, I continue to be mentored by several men. It really started in high school, when in God’s providence I was cared for by my youth leader. Beyond the usual group interactions, I would meet with him individually to be discipled. I would spend time in his home.

I watched him care for his wife. I saw him balance a full-time job as an engineer with his callings in the home and in the church. In other words, I spent time with him. Intentional time. And it was one of the best things I’ve ever done. So I’ve chosen to write about mentoring not only because I think it’s sadly lacking in today’s youth culture, but also because it has meant (and continues to mean) a lot to me personally.

Although no Bible index or concordance includes the word mentoring, its practice plays a prominent role throughout the Scriptures. The word mentor means “a wise and trusted counselor or teacher.”

To start, we might turn to Moses and the influence of his father-in-law, Jethro, in Exodus 18. As the newly appointed and anointed leader of God’s people, Moses already had a full plate. People were coming to him with their problems. He was both their counselor and judge.

Yet Jethro, being older and wiser, cautioned Moses that he could not continue at this level of work. Major burnout was on the horizon. His advice was to find God-fearing men to help carry the load, to bear the burden. And so it went. And Moses was the better for it.

The principle here is worth noting. Moses, while not young in age, was young at leading. Sometimes new leaders think they have all the answers and can do all things. Yet Moses listened to the counsel of his mentor. We need teachers who will instill wisdom into our lives, in part because we have blind spots and often think too highly of ourselves.

Maybe this is a good place to mention your parents. I’ll have more to say about finding mentors inside the church, but don’t forget that your parents, assuming they love Christ, have been placed over you to instruct and guide you. I recently had a conversation with a man in his seventies who, when he reflected on the past, joked that his parents got a whole lot smarter the older he got. Sometimes in our teenage years, we think we’re smarter than Mom and Dad. But the older we get, the smarter they become. (Actually, they were always the smart ones. You just didn’t see it then.) Of course, parents make mistakes. But they can often see what you can’t. As Solomon teaches:

My son, keep your father’s commands And do not forsake the law of your mother. Bind them continually upon your heart; Tie them around your neck. When you roam, they will lead you; When you sleep, they will keep you; And when you awake, they will speak with you. For the commandment is a lamp, And the law a light; Reproofs of instruction are the way of life. (Prov. 6:20–23)

The New Testament emphasizes the importance of mentoring and being mentored even more than the Old. Jesus spent three years with a group of twelve men. And what was he doing? Equipping them to lead the church when he was gone. It was Christ who said, “If anyone desires to come after Me, let him deny himself, and take up his cross, and follow Me” (Matt. 16:24–26). Surely our Savior was more than an example, but he wasn’t less.

But perhaps the apostle Paul gets the award for talking the most about mentoring. It was Paul who said, “Follow my example, as I follow the example of Christ” (1 Cor. 11:1). Again, in his letter to the Philippians, he says, “Brethren, join in following my example, and note those who so walk, as you have us for a pattern” (Phil. 3:17). Later he writes, “The things which you learned and received and heard and saw in me, these do, and the God of peace will be with you” (Phil 4:9).

And how could I not make mention of entire letters written to Timothy and Titus, Paul’s young pupils in gospel ministry, in which he exhorts them to remember his leadership and teaching as well as his example of suffering for the sake of the gospel.

Finally, Paul’s co-laborer to the Jews, Peter, exhorts the elders to be “examples to the flock” (1 Peter 5:3). Of the many responsibilities of your elders, serving as mentors is among the most important.

As you can clearly see, the Word of God testifies to the importance of mentoring and being mentored as one of the primary means of growth in the Christian life. Here’s the reality: you are following somebody. The question isn’t a matter of if, but who.

Having considered the biblical warrant for this practice, I want to conclude by suggesting a number of ways to make this a reality. (As an aside, make sure you’re listening for the “so what” of sermons, lessons, and studies, and pray that your pastors, teachers, and youth leaders would build the appropriate bridges between the ancient context and your own).

First and foremost, mentors are sought more than they seek. Most older and wiser people are not going to offer themselves but would gladly (and humbly) agree to spend time with you.

I currently meet with a former missionary who is currently a pastor every month for an hour or two over coffee. And I can assure you, he didn’t approach me; I approached him. He is too humble to offer his services, which is one of the reasons I asked him to mentor me. He confessed that before our first meeting he had to Google (even adults do it!) the word mentor, because he didn’t exactly know what he was getting himself into. We’ve met for almost a year now, and while we don’t follow a particular script other than talking and praying, it’s been incredibly sweet fellowship. He’s the kind of guy I just like being around. Which leads me to my next tip.

Look for people you want to be like. The Bible puts no age requirement on this. For some of you, this means finding people in your youth group or school that you respect. Spend time with them. Who we associate with is huge, especially in our developing years. Friends will rub off on you one way or another! Make sure those friends are pointing you to Christ and giving you a good example to follow.

Maybe this means spending more time with your Grandpa or Grandma. Perhaps it means asking your youth leader if he would be willing to get coffee some day after school (you heard it here first: they’d be tickled to!). My wife meets monthly with a friend from our church whom she enjoys, respects, and can learn a lot from. Her friend is only a little bit older than she is. Age is not always the issue. The goal is growth.

My third suggestion is to look for people right around you. Start in your local church. This is, after all, your spiritual family. In my opinion, one of the weaknesses of the Reformed church community is that we don’t take discipleship seriously enough. We need more older women teaching younger women and older men teaching the younger men as the apostle Paul writes in Titus 2:1–5:

But as for you, speak the things which are proper for sound doctrine: that the older men be sober, reverent, temperate, sound in faith, in love, in patience; the older women likewise, that they be reverent in behavior, not slanderers, not given to much wine, teachers of good things—that they admonish the young women to love their husbands, to love their children, to be discreet, chaste, homemakers, good, obedient to their own husbands, that the word of God may not be blasphemed.

Of course, this means that our older members need to have a willingness to pour themselves into younger Christians. For you older folks reading this article: perhaps this means pouring more energy into your church and less energy into your golf swing. There’s no shortage of opportunities.

But from my experience, I’ve never heard of a situation where a person is asked to be a mentor and then refused. So the impetus is on you, my younger brothers and sisters. Seek people to emulate. Watch those who love Jesus. Learn from dads and moms. Take notice of the husband who loves his wife. Don’t be afraid to copycat the twenty-something single girl who seems to care more about what God thinks of her than what the world does.

And finally, pray. Would you ask God to bring one, perhaps two, people into your path who would invest in your life? The answer is probably right in front of you, but maybe not. Ask God, who invested His precious blood for you, to provide a mentor.

God loves to use people as his sanctifying agents to bring about the necessary progress in our faith. None of us are where we need to be. Ask others to help, and see God’s grace pouring into your heart through the gift and wisdom of a mentor.

Rev. Michael J. Schout is the pastor of Grace URC in Alto, Michigan. He welcomes your feedback at mikeschout@gmail.com