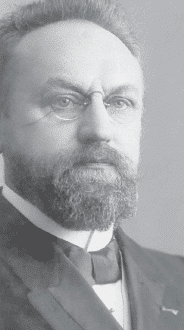 In prior articles on Herman Bavinck’s extensive treatment of the doctrine of sin, I noted that Bavinck treats the doctrine of sin as a kind of backdrop to his exposition of the biblical doctrine of salvation through the person and work of Christ, the Mediator of the covenant of grace. As the Mediator of the covenant of grace, Christ restores believers to covenant fellowship with the triune God. Through the person and work of Christ, the last Adam and covenant head of the elect, believers are restored to life communion with God, enjoy the grace of free acceptance with God, and are redeemed from the power and dominion of sin. Through Christ believers are delivered from the guilt of sin and restored to a state of favor with God. And through Christ believers are redeemed from the corruption of sin and granted perfect life and blessing in unbreakable communion with the living God. The two principal effects of original sin, guilt and corruption, are remedied through the comprehensive work of Christ, the Mediator.

Israel’s Hope for the Messiah

Rather than immediately plunging into the biblical doctrine of Christ’s person, Bavinck opens his exposition of the person of Christ by noting that there is a universal awareness throughout human history that human beings need a mediator or savior. While this universal awareness takes a myriad of forms, some of which are far removed from the biblical understanding of our need for redemption through the work of the Redeemer, it is an irrepressible feature of human life. The history of religions bears witness to this sense of our need for restored communion with God as well as deliverance from the power of sin, evil, and death. Throughout human history, we meet in various forms the conviction that the world is not as it should be, that human life is broken and filled with pain and discomfort, and that there must be a deliverer who will bring restoration and blessing.

To illustrate this inescapable sense of our need for a deliverer, Bavinck cites the role of mediators between God and human beings in the history of religions, the recognition of certain persons who are uniquely empowered to reveal the things of God, and the devotion ascribed to religious leaders or founders who are believed to have overcome evil with good. “In many religions there is even not merely a general expectation that one day good will overcome evil, but that expectation is connected with a specific person: in Indian religion, for example in Krishna; in Perian religion, to Saoshyant; in Egyptian religion, to Osiris; in Norse religion, to Bader” (RD 3:239). Among many nations and peoples, moreover, kings and other formative figures were addressed and greeted as saviors or godlike figures, illustrating the desire among the peoples of the earth for someone who would bring blessing to human life and overcome the powers of evil. These expectations and hopes for a deliverer, which are present throughout human history and in the religious aspirations of a variety of peoples, bear witness to the fact that the “Gentiles hope for the arm of the Lord, and the coastlands await the instruction of his Servant (Isa. 42:4; 51:5; 60:9)” (RD 3:240).1

This universal awareness of a need for a mediator has led many modern scholars to argue that Israel’s “striking expectations for the future” were merely an expression of this more common religious phenomenon. In Bavinck’s estimation, the similarity between Israel’s expectations for the coming of a future Messiah and that of the surrounding nations should not be overstated. The “analogy” between them is an “external similarity,” but does not amount to an “identity” (RD 3:241). Even though many people’s expectation for a future day of salvation and blessing represents a kind of sinfully distorted reminiscence of the promises of God to his covenant people, Israel, they are not the direct fruit of divine revelation. Rather than viewing Israel’s expectations for the coming Messiah as a byproduct of the influence of similar expectations among peoples surrounding her, we should view these expectations, as the Scriptures themselves attest, as the expression of Israel’s confidence in the promises of God. The promises of God that were communicated through the prophets in the Old Testament were already given to the entire human race after Adam’s fall into sin (cf. Gen. 3:15) and then repeated afterward throughout the history of the covenant of grace. These prophetic promises were not limited in their “field of vision to the people of Israel and the land of Canaan,” but extended to “the whole earth.” The promise to Abraham included the blessing of all the families of the earth through the “seed” that would be given to him. The expectation of future salvation among the nations is but a faint reflection of the “universal spiritual kingdom that God promises to his people at the end of history” (RD 3:243).

In the Old Testament, all of the promises of the covenant Lord of Israel find their focal point in the coming of the Messiah. According to Bavinck, “The Old Testament does not contain just a few isolated messianic texts; on the contrary, the entire Old Testament dispensation with its leading persons and events, its offices and institutions, its laws and ceremonies, is a pointer to and movement toward the fulfillment in the New Testament” (RD 3:243). Although Bavinck does not use the terminology, he interprets the Old Testament in its entirety as a “preparation for Christ” (preparatio Christi, to use an expression of Calvin’s). This is evident especially when we consider the Old Testament prophets, priests, and kings. In each of these divinely appointed office-bearers in the Old Testament economy, we find a prefigurement of the person and work of Christ, the promised Messiah to come.

Perhaps the clearest expression of Israel’s expectation of a future Messiah or Savior is connected with the office of kingship in the Old Testament. The theocratic king, embodied and prefigured especially in David, was a type of a future king who would shepherd the people of God and bring the blessings of God’s coming kingdom. “The king is the bearer of the highest of divine dignity on earth. Theocratic kingship . . . found its purest embodiment in David; for that reason the kingship will remain in his house (2 Sam. 7:8–16). This promise of God to David, accordingly, is the foundation and center of all subsequent expectation and prophecy” (RD 3:244). Throughout the history of revelation in the Old Testament, the promise of a future king in the line of David’s house came to include a rich variety of elements. When the house of David would be in disrepair, no more than a “hewn trunk,” God would cause a “branch” to grow up and flourish (Isa. 11:1–2; Zech. 3:8; 6:12). Out of a state of humility and weakness, God would raise up a son of David who would come from little Bethlehem and whose goings forth were of old (Mic. 5:2; cf. 3:12; 4:8, 13). Of this son’s kingly rule there will be no end, and he will be called “Wonderful, Counselor, Mighty God, Everlasting Father, Prince of Peace” (Isa. 9:6–7). When the promise of the Messiah’s coming was fulfilled, he would establish an eternal kingdom of righteousness and peace, and he would extend his rule over the Gentile peoples, even to the ends of the earth (Pss. 2, 45, 72; Ezek. 37:25; Zech. 6:13; 9:10).

Furthermore, the Old Testament expectation included the provision of a Mediator, or deliverer, who would fulfill not only a kingly and prophetic office but who would be a priest-king (Jer. 30:21; Zech. 3; 6:13; Ps. 110). In this way, the expectations for a future Messianic deliverer came to include the idea of a figure in whom the three offices of prophet, priest, and king would coalesce. Not only would the deliverer be a Messianic king come to establish God’s kingdom in its fullness among the nations, but he would also be a bearer of the Word of the Lord and a priest whose suffering would atone for the sins of his people. Especially in the prophecy of Isaiah, the three offices of the Old Testament economy find their completion in the figure of the Suffering Servant of the Lord. While these expectations never reached the kind of clarity as is evident in the fullness of time with Christ’s coming, the evangelists and prophets of the New Testament, and particularly Christ himself in his proclamation and teaching regarding the kingdom of God, appeal throughout their writings to the promises of the Old Testament, all of which have their Yes and Amen in Christ (cf. 2 Cor. 1:20).

1. It is characteristic of Bavinck’s Dogmatics that he often finds broad parallels between the Christian faith, as it is founded upon the inscripturated special revelation of God in the Bible, and the tenets of world religions and historic religious practice. While Bavinck always appeals to Scripture as the supreme norm for Christian theology, he has a lively appreciation for the way God’s general and special revelation finds a sinfully distorted expression outside of the Christian faith and church.

Dr. Cornelis Venema is the President of Mid-America Reformed Seminary in Dyer, IN. He is a contributing editor to The Outlook.