The year was 410. Visigoths were plundering and sacking Rome, the great city that was once the seat of the world’s largest and strongest empire. Many Romans saw this destruction as a direct punishment from the gods for the Romans’ departure from pagan religion. Many Christians despaired, wondering why God would send this pestilence into their empire. Into this scene of chaos and questions came St. Augustine of Hippo and his book, The City of God.

Augustine had been raised by a Christian mother. However, he neglected his mother’s teaching and fell into a sinful lifestyle. Although he became a wealthy and respected teacher, he was wretched. But the providence of God led him to attend church services in Milan, where he learned from the Bishop Ambrose. As he learned more about the Scriptures, he found that the God of his mother was a personal God who loved him. Because of what he learned in Milan, Augustine knew he had to give up his selfishness in order to live a Christian life.

One day Augustine experienced a dramatic conversion by the power of the Holy Spirit. He read from Romans 14 and finally came to understand that the grace of Christ was all that he needed. Augustine’s life was radically altered from that moment onward. He left his sinful life and began a new life dedicated to the service of God. 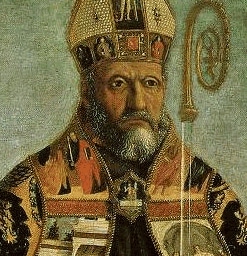 In The City of God, Augustine reminds Christians that their citizenship is not of any earthly kingdoms, but of a heavenly one. Christians are only pilgrims in this world, he said, traveling onward to their heavenly home. With sweeping words of comfort for the Church, as well as a reprimand to those who put their trust in earthly kingdoms, this book swept the Christian world and has become one of the classics of Christian literature. Perhaps the best known and cherished part of this book is section entitled “The Two Cities.”

At the beginning of this selection, Augustine makes the statement that there are “two cities” within the human race, an earthly city and a heavenly one. Augustine’s allegory of two warring cities serves as his thesis and theme throughout this selection. These two cities are diametrically opposed to each other – one is fueled by overwhelming ego, lustful passions, and extreme desire for power, and the other by overcoming faith, selfless love, and humble servitude.

The two warring cities are a picture of the doctrine of the antithesis. The antithesis is that separation between the Church and the nonbelieving world. In Augustine’s The Two Cities, the city of heaven signifies the elect children of God, while the city of the earth signifies the reprobate children of Satan. Cain and Abel, the sons of Adam and Eve, are a perfect microcosm of the antithesis. Augustine uses Hebrews 11 to show that Abel was a pilgrim in this world. On the other hand, Augustine asserts that Cain was a child of the world. Although these two boys were both raised in a covenant home, they ended up on two very different roads. Augustine points out the historical fact that Abel did not found or live in a city like his brother Cain. He then compares that to the spiritual fact that Abel, as a member of the heavenly city, had no attachment to the world and its sinful pleasures. Augustine says, “For the City of the saints is up above, although it produces citizens here below, and in their persons the City is on pilgrimage until the time of its kingdom comes.” Although we are still living in this world, we must not be conformed to it (Romans 12:2).

True Christianity by its very nature produces good citizens who follow the laws of the land to the best of their ability. However, we can never truly be citizens of the world in a spiritual sense. The Church must, like Abel, “desire a better, that is, a heavenly country. Therefore God is not ashamed to be called their God, for He has prepared a city for them” (Hebrews 11:16).

Already, But Not Yet

However, we as the Church do not yet live in this perfect city. In this world we live, work, and even worship right along with the reprobate. Augustine points out that these evil times of humiliation and persecution are preparing Christians for our future exaltation. However, even in these times of trials and troubles, we are blessed not with earthly peace, but with the hope of our heavenly home.

It is ironic how the unbelievers strive for wealth and fame, searching for temporal pleasures, yet do not have peace in their souls. Augustine says that the members of the heavenly city who by faith look forward to the promised blessings of heaven receive spiritual blessings, and are already enjoying the joy of heaven.

In a rapture of pious delight, Augustine goes on to describe the victory of the Church when it reaches heaven. “How great will be that felicity, where there will be no evil, where no good will be withheld, where there will be leisure for the praises of God, who will be all in all!” He calls heaven “the perpetual Sabbath,” that is, a place of unceasing praise to God.

Augustine goes on to say that in heaven our free will, which mankind lost at the fall, will be restored. However, this freedom of will be “freer in that it is freed from a delight in sin and immovably fixed in a delight in not sinning.” Can you imagine! We will be free from all of our sins which “so easily ensnare us” (Hebrews 12:2), free from all of our daily temptations and strife! What a blessing we have to look forward to in that perpetual Sabbath in heaven!

Augustine’s doctrine of the antithesis certainly makes a beautiful allegory of two cities, but is it true? Is there really a perpetual state of warfare between two factions of the human race? The Bible clearly declares the antithesis to be true. Ever since the fall of man, this sharp division in the human race has existed. In the very beginning of the Bible, Genesis 3:15, God declared this antithesis. There He told the Serpent that there would be enmity between his seed and the seed of the woman. The seed of the Serpent in this passage are the unbelieving reprobate. The seed of the woman is the Church, which is constantly struggling with that unholy trinity of the devil, the world, and their own sinful flesh. Ultimately, the Seed of the woman is Christ, who came utterly to defeat the serpent and his seed. Through this Seed, Christ, the Church has her ultimate victory.

How does this view of the antithesis affect our worldview? Should we as Christians now completely separate ourselves from the city of the world? Augustine would agree that the answer is no. Rather, this doctrine of the antithesis should make us more fervent in our desire not to conform to the ways of the world, but to be transformed by the renewing of our minds, to be more Christlike in our thought, words, and deeds. As Christians, we are called to be in this world, to shine as lights to our fellow man; we must live our lives as a testimony to those around us. However, while we labor in this task, we should also remain unstained from the world. Witnessing is not an excuse for being overcome by the pleasures of the world. Remember what Augustine said: our reward is in heaven, and is beyond compare.

Mr. James Oord is a student at Grove City College in Grove City, Pennsylvania. He is a member of the Covenant United Reformed Church in Kalamazoo, Michigan.