When this January issue of TORCH AND TRUMPET reaches our readers, the year 1958 will either belong to the irrevocable past or it will be on the point of expiring. What can we say that will be of some help to those who give serious thought to the significance of the passing of the Old Year and the ushering in of the New? 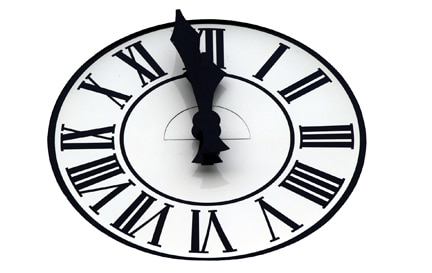 Let us begin by striking a personal note. For years it has been our custom to ask some of our friends on New Year’s morning what mental picture they have of the year as it proceeds on its relentless course from January 1 to December 31. For everyone, it seems to us, must have some mental image of the passing of time as God himself has divided it into years and the years into months, weeks, and days.

We have discovered that not all of us would make the same drawing if we were asked to .give on paper a lineal design of the successive years. This writer, for one; would draw a straight line, representing a whole year, and then, beginning anew where the line began, draw over it another line, ending where the previous line ended. In other words, we visualize a road which we traverse for an entire year and then, at the turn of the year, we go back to where that road began and cover tile same distance once again. But a friend of ours said his mental picture was quite different. He thinks of that road of time as continuing without a break when one year ends and another begins. Others have still another conception. Their image of the year is that of a circle: to them the year is a cycle of time which makes the same round from January 1 to December 31. There is really no difference between the first and the last of these three representations. Both picture the New Year as beginning where all preceding years began.

It would be pointless, of course, to ask which of these mental images is correct. All have the same implications though the emphasis differs.

First of all, the persons who think of time as a straight road which goes on and on are impressed with the fact that no year is in any real sense a duplication of those that preceded. They probably agree with the assertion that history never repeats itself. They stress the fact that our experiences in 1959 will be unique; that the Lord will have many surprises in store for us, both pleasant and unpleasant; that there will be experiences and combinations of circumstances in our life in the new year which are beyond our present surmise. It is usually tile unexpected that happens, they say.

It must be admitted that this outlook on the new year is by no means foreign to the Christian optimist who believes that with spiritual growth there will come new insights, new visions, new blessings and joys.

Such an attitude has great value. If we believe that the Lord goes with us in life’s pilgrimage and that every year and every day bring us closer to the city which hath the foundations, we can be of good cheer even though we know that sorrows and disappointments as well as unexpected joys will come to us. The best is yet to come. Does not the inspired poet say concerning those who travel to the heavenly Jerusalem: “They go from strength to strength; everyone of them appeareth before God in Zion”?

Those who think of the New Year as an unbroken line that continues where the Old Year ceases are not forgetting that the new road is not essentially different from the old. But this fact is more prominent in the thought of those whose imagination carries them back, on January 1, to the beginning of the road. They are impressed with the sameness of the years. In a real sense, they say, no year is new. There is nothing new under the sun. “Time, like an ever-rolling stream, bears all its sons away.” The stream is the same regardless of the number of bridges under which it hurries out of sight to reappear on the other side. Not till our earthly life has ended will God transfer us to another road—higher than the low road on which we are traveling now. Not till time, as we know it now, ceases, will the Lord announce: “Behold, I have made all things new.” How we long for that new New Year—that endless year of perfect bliss in the Lord’s presence when all our personal battles will have been fought and the entire Church will be the Church triumphant.

There would be unrelieved pessimism in our hearts if we thought only of the old-ness of the New Year. We would say in weariness of soul: “This year we shall be doing the same things we have done before. We shall perform the same kind of tasks, go to the same places, read the same papers and magazines, think the same thoughts, entertain the same fears. O the monotony of it all! But that is not tile Christian approach. For even though life will be the same as it was in most or all of its forms, the inner content and meaning can be richer, and will be, if we are children of God. Our eating and drinking, our working and worshipping, am inner thoughts and our daily contacts with others can be on a higher spiritual plane. If 1958 was a low road in our spiritual experience and achievement, we can cover the same distance in 1959 on a higher level of love and faithfulness, of service and patience, of gratitude and praise, of courage and hope.

This will be impossible unless we make sure that 1959 will be a year lived with God in Christ. If his presence goes before us we know that the New Year will be better than those that belong to the past. Even when we do exactly the same things we did last year, they will not be the same. Our thoughts will be new and fresh if we bring them into captivity to the inexhaustible Word. Whatever we relate to God, and in the measure we relate it to God, will be seen in new perspectives. We shall see sins we have not seen before. We shall recognize blessings which in former years passed by unnoticed. Our trials will bring out new resources of endurance and trust. We shall spy opportunities for witness and service which we did not see before. There will be failures a plenty but there will also be new successes and victories to cheer our souls. Every year will be a better year if our life is lived with God.

What will 1959 mean for the local churches of which we are members? Will those of us who are ministers, elders, and deacons have a definite program of work, geared to the ideal of the perfect church as delineated in the Scriptures? Outward improvements have their value but inward growth and spiritual deepening are far more important. Will we walk only in the treadmill of a monotonous repetition of duties or will we be marching on to new spiritual achievements?

And what will 1959 reveal as to our denominational life? Will it be another year of increasing conformity to lower standards of loyalty to the Word as we find them in denominations that have drifted far from their moorings? Will there be new revelations of doctrinal meanderings and disciplinary discolorations? Or will we become more progressively and aggressively Reformed in all our activities? Will we yield a little more to the spirit of the age and of the modern church, or will we dare to be more distinctively Christian? Will we strive for a better balance between our two principal tasks of self-preservation and evangelism?

As to our family life, will we be as materialistic as in the past or do we resolve to strive for improved family altars, more frequenting of the inner chamber, more good reading, more discrimination in radio and TV programs, more love and kindness to our parents, children, brothers and sisters? And will there be more faithfulness in keeping the solemn vows we made at the baptism of our children to instruct them, as well as to have them instructed, in the doctrines of the covenant?