A reader in North Dakota wrote me asking, “When is it appropriate to applaud in church?” This man and his family had noticed in their small, rural church that sometimes the small children were applauded when they presented the special music. He was looking for a guideline, and he thought someone at the Church Herald might like to do some research and an article on the subject.

Although I’ve seen no orderly study of applause in church, I do know that this man’s church is not the only one to applaud performing children. Recently I worshiped at Marble Collegiate Church in New York, New York, and that large urban congregation, too, applauded lustily when a group of children finished singing. 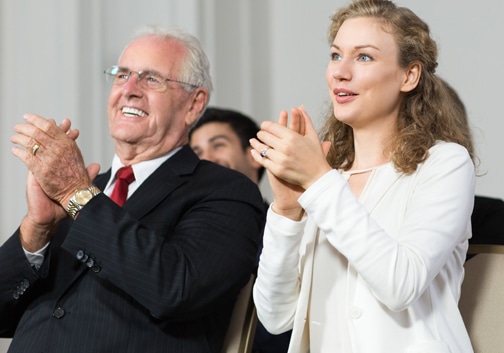 Another pastor-friend told me recently that just such a practice has gotten out of hand in his congregation. Applause has almost become the norm for musical “performances” during worship. Occasionally, however, there’s little or no applause and some of the children have consequently become tearful. They’ve naturally inferred that their performances weren’t meritorious.

The Reformed Church’s liturgies for worship—even the complete ones whose rubrics indicate when to stand and when to sit—make no references to applause. Neither do the liturgies of any other Christian denominations whose churches I’ve visited. Most congregations do, however, break into occasional applause, regardless of denomination.

Every time I hear applause in church, I think of Danish philosopher-theologian Soren Kierkegaard. He observed that Christians in nineteenth century Denmark generally thought of worship services as if they were stage plays, and Kierkegaard used the vocabulary of the theater—actors, prompters behind curtains, and audience.

Many worshipers do just that. They take their places in the pews and begin browsing through the bulletin just as they’d do in a theater or concert hall with their playbills. When the minister and the choir enter, usually occupying the platform, they often enter as performers would, and so the congregation sees them that way. This perception is often assisted by the fact that platform personalities appear in robes.

Kierkegaard scathingly critiqued his fellow and sister Christians a century and a quarter ago. The worship service is a drama, he agreed, but there’s widespread confusion over who’s the performer and who’s the audience. Kierkegaard’s arrangement: God is the audience; the congregation is the cast; clergy and choir are prompters.

God receives our worship. Kierkegaard’s formulation is therefore correct, and it implies that congregations should not applaud musicians or speakers. Congregational applause betrays wrong-headedness about worship, as if the congregation’s satisfaction were the objective. If ever there were a religion that worshiped humans, this would be it: human performers on stage with an audience ready to applaud when pleased. If that’s the way worship strikes you, then you and I worship different gods.

My view of applause in church may seem narrow and my advice blunt: Don’t applaud during worship. Keep the applause in the theaters and concert halls where it belongs.