When the Lord first spoke through Hosea, the Lord said to Hosea, ‘Go take to yourself a wife of harlotry…” (Hosea 1:2)

Valentine’s Day is not a religious holiday. There are no special services in the church; no Hallmark cards with biblical scenes; no special hymns dedicated to this day being considered for inclusion in the new URC Psalter Hymnal or Can RC Book of Praise. It is a holiday filled with love stories, and one of the greatest and perhaps strangest of all true love stories in the history of the human race is found within God’s Word. It is the account of the prophet Hosea and his marriage to the unfaithful Gomer.

There was a time in the history of Israel when God came to one of his servants, a prophet named Hosea. God told Hosea that he was to  illustrate through his own life the relationship that God has with His people. To make this illustration compelling, God told Hosea to marry a prostitute—someone he knew would be unfaithful to him.

God told Hosea that his marriage would be a dramatic pageant played out before the nations of Israel and Judah. Hosea would play the role of the loving and faithful God. The erring wife, Gomer, would be cast in the role of the perverse nation. She would play the harlot with many lovers, even as Israel had left the one true God and gone after a multitude of strange gods. At the very heart of this pageant was the fact that through all of her unfaithfulness, Hosea would remain faithful. In spite of Gomer’s greatest disloyalty, Hosea would remain loyal.

Gomer and Her Lovers

Not long after the vows were exchanged, Gomer no longer felt satisfied with her faithful, loving husband. She left her husband and began living with other men. Each lover Gomer had was poorer than the previous one and brought her lower and lower into degradation and filth. It became so bad that Gomer’s lover could no longer support her.

In such times, Hosea would provide for Gomer even in her runaway life. When she reached the very lowest point of her folly in the very depths of her sin, even then, she would find her husband ready to take her out of her misery and restore her to the joy of faithfulness and righteousness. In that way, the couple would provide a dramatic display of Jehovah’s faithfulness. Hosea, the loving husband would come and leave food and clothes on the doorstep so that Gomer could eat and be presentable.

Gomer’s lover thought that was great! “No fool like an old fool,” he must have thought to himself as he gathered up the things Hosea left on the doorstep and took credit for them himself. We can almost visualize Hosea lurking in the shadows to catch a glimpse of the one whom he loves and making sure that she was well provided for. How he must have wept as he saw Gomer embrace her lover and thank him for the gifts that he had brought. 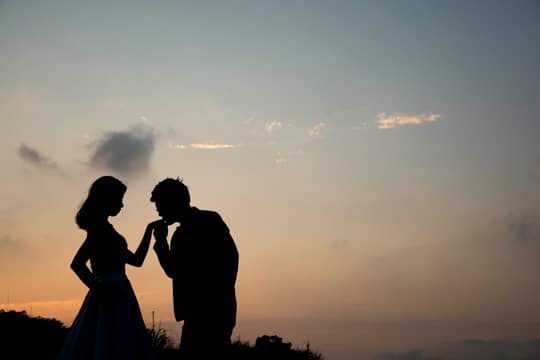 “Now,” God says to Israel, “this is how I treat you—like Hosea treated Gomer; and you treat Me like Gomer treats Hosea.” The account of Hosea and Gomer is a picture of God and us! God is the faithful husband and we are the adulterous wife. God pays all our bills, giving us the ability to work and accomplish our tasks. God gives us the sun and the rain, the seasons as they follow their course. God fills our pantries, our freezers, and our homes. He gives us all that we could ever ask for—and more. Yet, in our sinful nature we run away from God. We turn to other gods such as the gods of materialism, self-centeredness, complacency, and a host of others, each one worse than the previous one. But God says, “I still love you. I will still provide for you.”

We, like Gomer, run away from the One who loves us. “We say “I have gotten away from Him! I have no need of Him!” The same words Gomer must have said of her husband, Hosea. Then Jehovah touches us on the arm and says, “No, you have not gotten away from Me. I am right here and I am telling you that I love you and that I am providing for you.

Still, we pull away from God and run. We try to hide our faces from God just as Adam and Eve did in the Garden of Eden. We enjoy living in our sin. Yet, wherever we go, God says, “I am there already.”

There are those who would argue that God does not love us when we run away from Him. But He does! Have you ever run away from God, and didn’t God give you the strength to do it? Didn’t the prodigal’s father give his son his rightful inheritance, thereby allowing his son to squander it? And didn’t he love his son despite his son’s running away from him? Didn’t Hosea’s heart go out to Gomer as he saw her sell herself to those who cared nothing for her? Are these not examples of God’s great love for us even while we are in our sin? For while we were yet sinners–living like Gomer–Christ died for us!

Hosea is the perfect example of God’s great forgiveness and the great example of God’s immeasurable love. He kept on loving Gomer even as she sank lower and lower into the depths of her degradation. She sank so low that, in Hosea 3, she has become a slave put upon the auction block.

We know a great deal about the slave market in ancient times. Almost half the population was in slavery to the other half. Hardly a day would go by when, in any given city, human beings would be sold on the open market. Ancient writers have left terrible and grotesque pictures of the sale of human souls. The life of the slave was utterly worthless. He or she would be at the mercy of the highest bidder, whoever that bidder might be.

It is to a scene such as this that Hosea arrives. Jehovah had told him to go a purchase the wife that he has loved for so long but now was being sold on the auction block. Suddenly, before his very eyes appears his wife. She is stripped and exposed to the crowd. Through the cat-calls and the scorn came the bids: three pieces of silver…now five…now eight…do I hear ten?

Does the Lord love like that? Before sending Hosea to the slave auction, God told Hosea, “Love her as the Lord loves Israel” (Hosea 3:1). “But Lord, she’s a prostitute sold on the auction block as an adulterous slave!”

“Go, Hosea,” says Jehovah. “Love her as the Lord loves the Israelites.”

Under ancient law a person could do as he pleased with any slave he had purchased. Can you imagine the thoughts that must have run through Gomer’s mind as she realized it was Hosea who had purchased her–the very one to whom she had been unfaithful? If Hosea had taken this woman and told her that she was going to be punished for all her infidelities, if he tortured her to within an inch of her life, he would have been free to do so.

Although that may have been what Gomer expected and what she deserved, it is not what Hosea does. Remember, Hosea is reflecting the love that God has toward His own and God never acts that way toward the ones whom He has bought with His own precious blood.

Instead, Hosea says: “You shall stay with me for many days. You shall not play the harlot, nor shall you have a man; so I will also be toward you” (Hosea 3:3). Understood properly, those words jump out at our heartstrings. They are words filled with emotion. What Hosea could not receive from the free will of his wife, he now has every right to demand of her because he has bought her.

She was to remain with him in faithfulness. This was her place because for this reason she had been purchased. No longer could she be a plaything passed from one man to the next. She belonged body and soul to Hosea. He bought her and she was to be faithful to him.

Sound familiar? Remember, dear Christian, that Gomer represents you! What God could not receive from us from our free will, He now has every right to demand of us since He has bought us—not with silver or gold–but with His own blood. We are to remain faithful to Him. This is our place because it is for this purpose that we have been purchased. No longer can we be playthings bouncing from one false god to the next. We belong body and soul to our faithful Savior, Jesus Christ.

Here the love of Hosea truly shines through. He is demanding of Gomer faithfulness. He has every right to do so because it was for that purpose that he bought her. But he adds that he will also be faithful toward her! He does not have to do that. She is his slave.

The symbol of the vow that the Bridegroom made with us was not a gold band to wear around our finger, but it was the body pierced upon the cross, His blood shed for our lives.

Jesus Christ has shown His love to us. We have slipped into flirtation and allowed ourselves to be seduced by others. Even so, Jesus remained faithful. He loved us even though we were unlovely; He was true to us even while we were filled with lies to Him; He fed us and nurtured us even while we fled from Him and gave thanks to our other lovers for the gifts that He provided.

Jesus followed us through every step of our wandering and bought us back when we were on the auction block. As Jeremiah noted, “He has loved us with an everlasting love.” John wrote in John 13, as the disciples entered the Upper Room before the Last Supper, “Having loved His own who were in the world, He loved them to the end” (John 13:1).

Our response should be complete devotion to our Savior, seeking to be faithful to Him in all that we do. He has brought us out of our degradation and sin and promised His faithfulness to us.