We live in a world that loves old stuff.

This realization came to me recently while wandering the streets of Sayville, the town where my church is located. In just a few hours in this cozy village, you can eat under the 1950s neon lights of the Sayville Modern Diner, browse through piles of rotary phones and vintage meat grinders at an antique shop, visit a store devoted exclusively to the sale of vinyl records, and pass a house where George Washington stopped to have tea around 1790. Sayville is a favorite among tourists and locals alike for its nostalgic appeal.

Old things aren’t the only objects of our fascination, though; so are old traditions. A few years ago at the Plimouth Plantation restoration, I found a sign inviting visitors to experience a reenactment of historic Puritan worship. This event, said the advertisement, was “designed to give you a smidgeon of 17th-century religion including psalm-singing from the 1612 Ainsworth Psalter and a reading from the Geneva Bible.” If such living history experiences are any indication, we seem to have a special fondness for the bygone traditions of our forefathers.

It occurred to me, however, that this world’s attitude toward old things is a little schizophrenic. No matter how frequently we tour historic sites or how much we decorate our homes with antiques, we tend to shun lifestyles and modes of conduct that we view as stodgy or outdated. When it comes to philosophy and religion, we have a lot in common with the Athenians spoken of in Acts, who “would spend their time in nothing except telling or hearing something new” (Acts 17:21 ESV). If it doesn’t accord with a twenty-first-century perspective, we consider its value dubious.

Many Christians apply this kind of chronological schizophrenia to the church as well. They find something appealing about the quaintness of an old meetinghouse, yet grumble when the only seats in their place of worship are hard pews. They fondly recall “the old hymns of the faith,” but scorn traditional worship for being “stuck in the nineteenth century.” They like the Bible well enough, but if the pastor preaches too much from it they accuse him of irrelevance.

As some of the more old-fashioned churches in the neighborhood, Reformed congregations have long borne the brunt of such criticism. In the intellectual light of the age of reason, aren’t the creeds and confessions just musty five-hundred-year-old artifacts of the bigoted views of middle-class white men? How can a religious system that roots itself in the Middle Ages have anything to offer young people of the twenty-first century? The traditions of the Reformed faith may be quaint, but are they even remotely relevant?

A while back I came across an old vinyl album entitled The Word of the Cross. On it were recordings of the last two sermons delivered by Dr. Peter Eldersveld, a beloved minister of the Christian Reformed Church and broadcaster on The Back to God Hour, before his sudden death in 1965. And ironically enough, accompanied by the characteristic crackles and pops of a vintage record, Dr. Eldersveld was preaching on this very topic: relevance.

Eldersveld describes “a new kind of attack” being mounted against the church of his day. “It comes from within,” he says, from critical members and ministers who “speak with contempt for the finest creeds of the church, which they want not only to revise but to replace with more modern theologies.” Why? “[T]hey seem to have a sort of savior complex,” he says; “they think they are bringing the church up to date, making it more vital, or, to use one of their weary clichés, making it more ‘relevant’ in this modern world. In fact, they even picture themselves as present-day ‘reformers’ of the church, appealing to the great Protestant principle that the church must always be reforming itself if it is to be the living body of Christ.”

The church of the twenty-first century faces the same conflict as the church of the 1960s. While “relevance” may conjure up different ideas in our context, today the classic battle lines are still being drawn—between the old and the young, between the conservative and the progressive, between the traditional and the contemporary. And at the heart of it all is that unending quest for relevance.

But there is a paradox in all of this. Consider, for example, the Presbyterian Church in the USA’s decision this year to allow its clergy to officiate gay weddings. WORLD magazine columnist D. C. Innes offers a keen observation: “[T]he PCUSA is always dragging behind secular society . . . always late to the revolution. Despite their boast of enlightened thinking, these religious progressives are never in the vanguard, never on the cutting edge.” The emergent church considers any association with historic Christianity embarrassing, yet it embarrasses itself even more in its attempts to associate with the world. It has made itself too progressive to be biblical but remains too outdated to be relevant.

Meanwhile, for all the emphasis society places on change and novelty, it cannot escape one constant: the reality of living. Surely even the most hardened hedonist sometimes wonders why there is so much evil in the world, or why we die, or whether life has any meaning. Such questions are screaming for answers today just as relentlessly as they did five hundred years ago. The gospel of Jesus Christ offers answers—glorious answers that offer hope, comfort, and significance to life. But the modern church, in its desperate anxiety for culture’s approval, has neglected that gospel. In so doing it has distanced itself from the only message of permanent relevance in this hurting world.

Eldersveld’s words cut to the quick:

[T]he Reformers made the church relevant again by calling it back to the inspired and infallible Bible, to the ancient truth of God’s Word, to the historic gospel of divine grace in Jesus Christ—the gospel that Paul preached that gave birth to the Christian church, the gospel that is written in the twelve articles of our apostolic creed.

In other words, the Reformers were defenders of the faith which was once and for all delivered unto the saints. They came to grips with its enemies—not only out in the world, but especially in the church. And this explains why the Reformation became such a mighty force among the nations, in all the affairs of man, in every area of life: It spoke the living Word of God to the deepest need of mankind—the need to make peace with God at the cross of his Son—and therefore it could speak significantly and powerfully to the whole context of human problems in which that basic need comes to expression. . . .

How incredibly stupid that today men should talk about making the church more relevant by abandoning those very same doctrines which made the churches of the Reformation so strikingly relevant in their day. How can a church ever hope to be relevant in a world of sin if it no longer preaches the supernatural Word of God?

The motto semper reformanda represents one of the most glorious legacies of the Protestant Reformation: the idea that the church must always be reforming. But contrary to the interpretation imposed by progressivism, the Reformation was not about pushing the church forward; it was about pulling it back to the ancient truths of the Bible. We need to be always reforming because by nature we are always wandering. We need the doctrine of semper reformanda not because the truth changes but because we change.

Asking the culture how the church can be relevant isn’t just foolish, it’s deadly. No matter how forward-thinking a community of Christians may be, they cannot out-modernize modernity. They can follow the world to destruction, but they cannot anchor it to the truth. If the church of Jesus Christ is to be faithful to its calling—more than that, if it is to have any reason for continuing to exist—its only hope is to faithfully preach the gospel. Which is sharper, after all: the cutting-edge philosophy of the world or the two-edged sword of the Word of God which penetrates the utmost depths of the human heart (Heb. 4:12)? 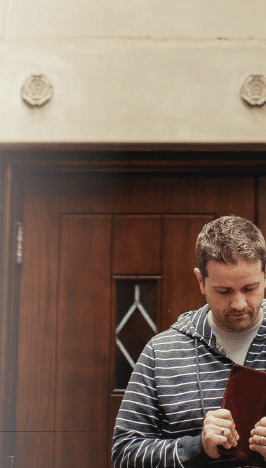 A faithful Reformed church, then, may not offer culture-savvy messages, the best selection of current contemporary Christian music, or Starbucks products for sale in the foyer. But it will offer you one thing you need far more: nourishment from God’s Word for your soul. In doctrine, in worship, in government, in family, in vocation, and in every other sphere, it will be a place where the Bible is not only believed but also lived out. When its members congregate as the joyful citizens of the kingdom of God, they will afford you a foretaste of the eternal Sabbath that awaits us in heaven (Heidelberg Catechism LD 38). What could be more forward-looking than that?

Perhaps you’re not the kind who worries about relevance. Maybe you’ve been a faithful member of a conservative Reformed church since before you can remember, and you hope to stay there for the rest of your life. But danger lurks here for you too. While your church’s cultural literacy may not matter to you, its role in your life may have dwindled to nothing more than “a smidgeon of 17th-century religion.” How easy it is for those of us who confess the relevance of the Reformed faith to let the message of the gospel slip into irrelevance in our own hearts! “Remember,” warns Eldersveld at the conclusion of his sermon, “our failures at this point make our churches stumbling blocks rather than steppingstones for thousands of people who should be finding their way into the one, great, everlasting Church of God, which he has purchased with the blood of his Son.”

The “one, great, everlasting Church of God” is the only institution known to man that can span the extremities of old and new. That church believes a book which records the story of the world from beginning to end, yet speaks to modern man as powerfully as it did in the apostles’ day. That church confesses a Savior who “was in the beginning with God” (John 1:2) but also always lives to make intercession for us (Heb. 7:25). That church’s members rejoice as they experience the “dying-away of the old self, and the coming-to-life of the new” (Heidelberg Catechism LD 33, Q&A 88). The truth of that “old, old story” is what inspires us to “sing a new song.”

Which God performed of old, Which in our younger years we saw And which our fathers told. He bids us make His glories known, The works of power and grace, That we convey His wonders down Through every rising race. (Blue Psalter Hymnal no. 150)              Peter H. Eldersveld, “The Defender of the Faith.” The Word of the Cross: A Memorial Album. The Back to God Hour, 1965. D. C. Innes, “The PCUSA’s Move from Mainline to Flatline.” WORLD, June 23, 2014. http://www.worldmag.com/2014/06/the_pcusa_s_move_from_mainline_to_flatline.

Michael Kearney a member of the West Sayville URC on Long Island, NY, studies communication and music at Geneva College in Beaver Falls, PA. He welcomes your thoughts at mrkearney@optonline.net