On October 19, 2002, Rev. Edward J. Knott, who until recently served as the president of the board of Reformed Fellowship, will observe the 55th anniversary of his ordination as a Minister of the Word and Sacraments. 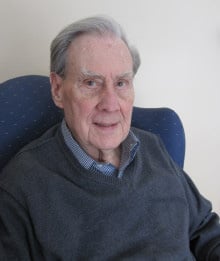 Upon retirement Rev. and Mrs. Knott became members of the Beverly Church in Wyoming where they had earlier served. They remain members of this congregation which is now known as the Bethany United Reformed Church of Wyoming.

Throughout his ministry Rev. Knott has been highly esteemed for his deep commitment to the truth of the Reformed Faith and for his wise counsel in matters ecclesiastical. His exceptional leadership abilities have been widely recognized and used in the work of the Kingdom of God. He has been delegated to Synod upon a number of occasions. He was elected to serve as an officer of synod both in the Christian Reformed Church and in the United Reformed Churches. He served for a number of years on the Home Missions Board of the Christian Reformed Church. That board called upon him to serve as its president. He was also a member of the Board of Trustees of Calvin College and Seminary. He has served for many years on the board of Reformed Fellowship. He is one of the founders of Mid-America Reformed Seminary now located in Dyer, Indiana. He currently serves that institution as Vice-President of the Board of Trustees.

Rev. Knott remains in demand for pulpit supply, for leading Bible Studies and is often looked to for wise counsel by both church members and church councils. During the years of his ministry he has been ably assisted and encouraged by his wife, the former Harriet Doezema whom he married in 1946.

The Board and membership of Reformed Fellowship are grateful for the services rendered by Rev. Knott during his many years of affiliation with them and extend congratulations to him upon this significant milestone in his ministry.