Did you know that there is only one apparent spelling error in the United States Constitution? It occurs in the 25th Amendment, which was proposed by Congress on July 6, 1965 and ratified on February 10, 1967. During the year and a half the amending process went on, one wonders whether someone somewhere noticed something odd.

Here’s the situation. Amongst other things, this amendment dealt with what to do if the President could no longer perform his duties. Suppose the President was unable to perform his duties because he was in a coma and unable to make this decision for himself. Article four says “the Vice President and a majority of either principal officers of the executive departments or of such other body as Congress may by law provide” has to inform the Congress of the President’s inability to function. By “principal officers of the executive departments,” presumably is meant cabinet officers such as the Secretary of Defense, Secretary of the Treasury, and so on. 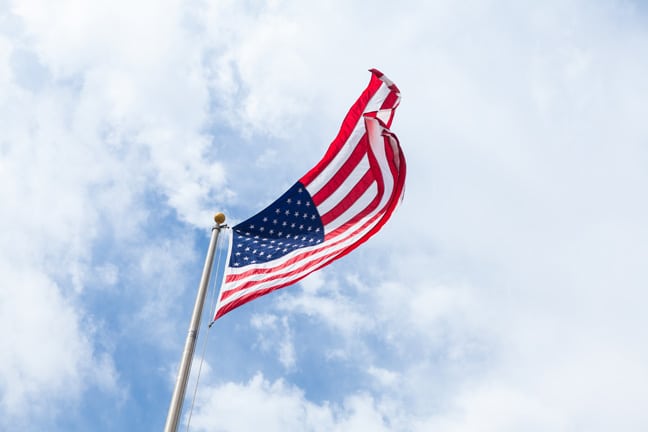 So far so good, but then, in article five, things get confusing. If the President informs the Congress that he is taking over his duties again, then this will happen unless there is an objection by “the Vice President and a majority of either the principal officers of the executive department or of such other body as Congress may by law provide.” In that case, Congress would have to decide the issue.

God in his mercy has never allowed the question as to the difference between departments and department to become a burning question and may he always preserve us from it. It does, however, present us with an interesting question. How can this error be corrected? Can we use an eraser or white out? Can we just write in an “s” at the appropriate spot?

There is another piece of writing that is even more difficult to change than the Constitution. This one has a much greater relevance to our life than any manmade law. All men stand condemned before God as sinners who have broken his Law. As a result, as we read in question 11 of the Heidelberg Catechism, “his justice therefore requires that sin which is committed against the most high majesty of God, be also punished with extreme, that is, with everlasting punishment both of body and soul.” This condemnation is referred to as if it were a legal document, called the “handwriting of ordinances” in Colossians 2.14. In that verse we read that Christ “(blotted) out the handwriting of ordinances that was against us, which was contrary to us, and took it out of the way, nailing it to his cross.” The only way this handwriting, which is in effect a spiritual death warrant, could be annulled or repealed was through the death of the Lord Jesus Christ. Christ took this handwriting and nailed it to his cross. That is, he took the punishment in the place of all those he chose to save. We read in 2 Corinthians 5.21, “For he (God) hath made him (Christ) to be sin for us, who knew no sin; that we might be made the righteousness of God in him.” I am reminded of the account, in Matthew chapter 9, of a paralyzed man was brought to Jesus by his friends. Obviously, what they wanted was that this man be healed. But what does Jesus say to him? We read in verse two, “Son, be of good cheer; thy sins be forgiven thee.” Now this offended the Jews because they rightly believed only God could forgive sins. The problem was that they did not believe Jesus was divine. Therefore, they believed he was speaking blasphemously.

This brings us to a vital question which Jesus poses in verses 4–5, “Wherefore think ye evil in your hearts? For whether is easier, to say, Thy sins be forgiven thee; or to say, Arise, and walk?” Well, let’s answer this question. What was easier for Jesus to do, forgive the man’s sins or heal him? Our first thought might be that forgiveness is the easier. After all, healing would take a miracle. But let’s not be hasty. God created everything and all power belongs to him. It would be nothing at all to God to heal this man. Think of the huge number of healings Jesus did whilst on earth.

Forgiveness, on the other hand, is different. In fact, doing away with this “handwriting of ordinances” requires an act more momentous than amending the U.S. constitution. Sure, repairing the misspelling in the constitution would take time and require action by the congress and a large majority of state legislatures. This, however, is nothing compared to what it would take for the punishment of even one sin to be paid and forgiveness extended. There is only one way for sin to be forgiven. In the words of question 40 of the Heidelberg Catechism, “…the justice and truth of God required, that satisfaction for our sins could be made in no other way than by the death of the Son of God.” Correcting even the smallest flaw in the constitution might take a monumental amount of time and effort. Cleansing our hearts from sin takes infinitely more than that.

Peter describes the terrible price Christ paid for our forgiveness in I Peter 1.18–19, “Forasmuch as ye know that ye were not redeemed with corruptible things, as silver and gold, from your vain conversation received by tradition from your fathers; But with the precious blood of Christ, as of a lamb without blemish and without spot.”

No act of Congress could take the guilt of our sins away. The satisfaction of God’s justice and the turning away of his anger are much too profound for that. Only the suffering and death of Christ can take away our guilt. The Belgic Confession, Article 21, says, “Neither is it necessary to seek or invent any other means of being reconciled to God than this only sacrifice, once offered, by which he hath perfected forever them that are sanctified.” Indeed, we can go further than that. Not only is it unnecessary to seek forgiveness of sins from another source, it is flatly impossible. Speaking of the Lord Jesus Christ, Peter declared in Acts 4.12, “Neither is there salvation in any other: for there is none other name under heaven given among men, whereby we must be saved.”

In my personal opinion, I can think of a few changes I would like to see in the U.S. Constitution as it stands today. It is highly unlikely, to put it mildly, that I could ever get these changes made. However, it is flatly impossible that I – or the entire human race combined – could change the handwriting, the condemnation, against us for breaking God’s Law. Only Jesus Christ, God’s only begotten Son, could accomplish that by his suffering and death. That he should do so for sinners such as us is beyond understanding but, praise God, not beyond belief.