One of the most prominent figures in the New Testament is the apostle Paul, a dynamic Christian missionary and the author of thirteen epistles, who had once been a distinguished Jewish rabbi. When he became acquainted with the claim of Jesus to be the long-awaited Messiah, he initially reacted negatively and began persecuting people who believed in Jesus and accepted his claim to be the Christ (Messiah). Saul, as he was known then, strove earnestly to defend his ancestral religion against the teachings of Christ and his disciples, and he perceived correctly that the conflict between his own faith, and that of the Christians pertained to the pursuit of the righteousness that God requires for people to be acceptable to him. In his letter to the congregation at Philippi, Paul referred to his previous “zeal [for] persecuting the church,” and he identified his original religious affiliation as that of a devoted Pharisee, that is, one who sought to achieve personal righteousness through rigorous observance of rabbinical law. As a rabbi, Paul was satisfied that he had attained a “legalistic righteousness [that was] faultless” (3:4–6).

The Righteousness of God

When Saul sought righteousness, he was displaying a concern to be right with God, which is an appropriate and wholesome desire. God, in the Bible, has described himself as the perfectly righteous creator and ruler of heaven and earth, and he has often displayed severe displeasure toward people who failed to demonstrate righteousness in their own lives. When God threatened to destroy the cities of Sodom and Gomorrah because of the wickedness of the populace, Abraham pleaded for him to spare righteous people. Abraham asked, “Will not the Judge of all the earth do right?” (Genesis 18:25). He understood that God always does right because righteousness is an attribute of the divine character. God is righteousness, pure and entire, so he is the standard by which to distinguish right from wrong.

Scripture and common practice associate righteousness with judgment and courts of law, which must enact righteous (just) judgments. After his conversion to faith in Jesus Christ, Paul testified, “There is in store for me the crown of righteousness, which the Lord, the righteous Judge, will award to me” (2 Timothy 4:8). Throughout the Bible believers expressed confidence in the righteousness of God and the justice of his judgments. He could never be wrong.

Abraham, Paul, and other biblical figures understood that the perfectly righteous God, who saved them from sin, demands righteousness from his human creatures. The Old Testament prophet Amos related that God insisted that the Hebrews “let justice roll on like a river, [and] righteousness like a never-failing stream” (Amos 5:24). God requires obedience to his law, which Paul affirmed is “holy, righteous and good” (Romans 7:12). In the words of Psalm 19, 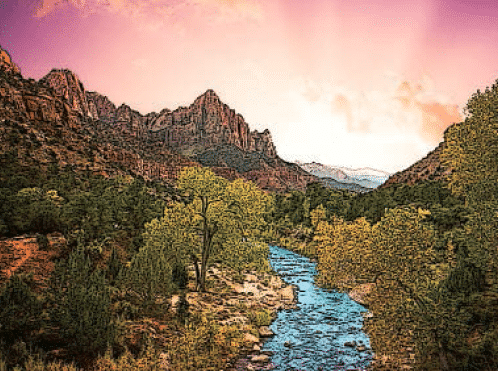 Failure to obey the laws, precepts, and ordinances of God is unrighteousness. Wrong belief and practice offend God and provoke his righteous anger and judgment, as in the case of Sodom and Gomorrah.

The Unrighteousness of Humanity

Humanity’s failure to meet God’s demand is obvious. Even people who assent to the divine law do not fulfill its requirements. God’s law commands perfect adherence. As Jesus said, “Be perfect, therefore, as your heavenly Father is perfect” (Matthew 5:48). The precepts of divine law are not ideals toward which only the most pious people aspire. They are legally binding statutes that everyone must obey. They are not options but obligations.

Failure to comply with God’s requirements leads to the application of his justice, which means imposing the penalties the law stipulates. His righteous character will not tolerate less than perfection. No religious exercises will compensate for failure. Religion without righteousness is an insult to God. To the very religious people of ancient Israel, people who were careful to discharge all their ceremonial duties, God said,

I hate, I despise your religious feasts; I cannot stand your assemblies. Even though you bring me burnt offerings and grain offerings, I will not accept them. Though you bring choice fellowship offerings, I will have no regard for them. Away with the noise of your songs! I will not listen to the music of your harps. But let justice roll on like a river, and righteousness like a never failing stream (Amos 5:21–24).

Scripture indicts the whole human race for failure to meet God’s requirements. The apostle Paul asserted, “There is no one righteous, not even one” (Romans 3:10). As surely as God punished Sodom and Gomorrah, he will inflict justice upon all sinners, for “the wrath of God is being revealed from heaven against all godlessness and wickedness of men who suppress the truth by their wickedness” (Romans 1:18).

Even the best people have not and cannot satisfy God’s righteous demands. Paul, while still a rabbi, tried earnestly. He described his effort graphically:

If anyone thinks he has reasons to put confidence in the flesh, I have more: circumcised on the eighth day, of the people of Israel, of the tribe of Benjamin, a Hebrew of Hebrews; in regard to the law, a Pharisee; as for zeal, persecuting the church; as for legalistic righteousness, faultless. But whatever was to my profit I now consider loss for the sake of Christ. What is more, I consider everything loss compared to the surpassing greatness of knowing Christ Jesus my Lord, for whose sake I have lost all things. I consider them rubbish that I may gain Christ and be found in him, not having a righteousness of my own, that comes from the law, but that which is through faith in Christ—the righteousness that comes from God and is through faith (Philippians 3:4b–9).

Very few people have made efforts to gain righteousness comparable to those of Paul, and all who have done so have failed. One who tried was Martin Luther (1483-1546), the pioneer of the Protestant Reformation, who was once a devoted monk. Luther adopted the monastic life in the hope of relieving himself of a burden of anxiety due to the knowledge of personal sin. He actually exceeded the rigors of self-denial his religious order required, but that did not bring him peace with God. On the contrary, realization of his own failures led him to despise God. Left to their own devices, sinners are always hopeless failures, especially when they attempt to achieve their own salvation.

The Alien Righteousness of Christ

One of the most pressing questions ever asked comes from one of the ancient books of the Bible. Job asked, “How can a mortal [man] be righteous before God?” (Job 9:2). The apostle Paul found the answer in the gospel of Christ. After describing his impressive achievements as a rabbi, he related how he obtained the righteousness he needed. To his friends in the church at Philippi he wrote:

In the gospel Paul discovered alien righteousness, which means the righteousness of another—in this case, the righteousness of Jesus Christ. Jesus, the Son of God, is perfectly righteous. Of him God the Father said “This is my Son, with whom I am well pleased” (Matthew 3:17). Jesus pleased the Father because of his sinless perfection—his flawless righteousness. By active obedience to God, Jesus met all the divine requirements. He therefore could dare his critics by asking, “Can any of you prove me guilty of sin?” (John 8:46). The sinless character of Christ made it appropriate for the apostle Peter to refer to him as a “lamb without spot or defect” (1 Peter 1:19).

To acquire the righteousness God demands, people must not look within themselves, for there is no salvation in self-esteem; nor may they depend upon their religious heritage or their personal religious performances. They need alien righteousness from Christ. Scripture affirms, “God made him [Jesus] . . . to be sin for us, so that in him we might become the righteousness of God (2 Corinthians 5:21). Imputation involves a two-fold transaction. Believing sinners obtain righteous standing before God when God imputes their sins to Christ and his righteousness to them.

The reception of Christ’s righteousness through faith is justification, which means legal acceptance with God based upon the active obedience of Christ in obeying the Father’s will and the Savior’s passive obedience in submitting to death upon the cross to pay the penalty for sin.

The same Paul who experienced this justification wrote about it extensively in his letter to the church at Rome, in which he contrasted the law, which demands perfect righteousness that sinners cannot achieve, and the gospel, which confers that righteousness as a gift to people whose most urgent need is to be right with God. Paul explained:

. . . no one will be declared righteous . . . by observing the law, rather, through the law we become conscious of sin. But now a righteousness from God, apart from the law, has been made known, to which the Law and the Prophets testify. This righteousness from God comes through faith in Jesus Christ to all who believe. There is no difference, for all have sinned and fall short of the glory of God, and are justified freely by his grace through the redemption that came by Christ Jesus. God presented him as a sacrifice of atonement, through faith in his blood. He did this to demonstrate his justice . . . at the present time, so as to be just and the one who justifies [declares righteous] those who have faith in Jesus (Romans 3:20–26).

Jesus Christ, by his sinless life and sacrificial death, has satisfied all of God’s demands and has paid the full penalty for believers who have within themselves no means by which to meet those demands. Devoid of personal righteousness, through faith (confident trust) in the Son of God, they receive his perfect alien righteousness.

In the sixteenth century the great theologian Martin Luther made the same discovery the apostle Paul had made centuries before. Luther, in fact, learned about justification through alien righteousness by making a methodical study of Paul’s writings. Like the apostle, Luther had striven to satisfy God by rigorous observance of religious rules. He became a monk in the hope of achieving the righteousness he sorely needed. In the letter to the church at Rome Luther found the truth of the gospel, the teaching of justification:

“He who through faith is righteous shall live” (Romans 1:17, RSV). Luther likened this discovery to being born all over again and experiencing paradise on earth. Thereafter he cited this doctrine as the article by which the church would stand or fall. Justification by grace alone, through faith alone, in Christ alone is the heart of the gospel, and it means that sinners, like Paul and Luther, must forsake all pretense to personal worthiness based upon their own works or merits and trust in the Son of God from whom alone they may obtain that alien righteousness, which is humanity’s greatest need.

Dear friend, perhaps through reading this essay, you, like millions of others, have realized your need of perfect righteousness in order to be right with God. If so, rejoice that the Spirit of God has made you aware of that need. Jesus promised that the Holy Spirit would minister after the Savior returned to heaven. When the Spirit comes, “He will convict the world of guilt in regard to sin and righteousness and judgment” (John 16:8). If the Spirit of God has convicted you, embrace the Christ of the gospel by faith and receive the alien righteousness, which is your greatest need.