Last November I flew to Korea. It was my first trip to that part of the world and I was eager to discover what this land was like. I have taught many Korean students through the years and was intrigued to learn something of their homeland. I was in Korea a week and so now I am an expert.

I arrived at Kimpo airport at night and my first impression of Seoul during the trip into the city was the large number of red neon crosses that lit up the sky. Korea has witnessed the remarkable growth of Christianity in this century. Approximately 30% of the Korean population is now Christian. 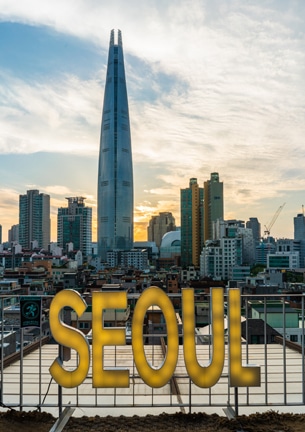 Dr. Myung Kim, the president, and the faculty of the Hapdong Presbyterian Theological Seminary invited me to give two lectures at a special conference in Seoul and then to give some lectures at the seminary in Suwon (a city about 40 miles south of Seoul). It was a wonderful opportunity to get an introduction to the Korean church.

The conference was an annual one to honor the memory and work of Dr. Yun Sun Park. Dr. Park was remarkably used of God to advance the cause of Christ in Korea. His life is in many ways a microcosm of Christianity in Korea.

He was born in 1905 in a land that was occupied by Japan from 1906 to 1945. He grew up in the midst of a revival of Christianity in his homeland that had begun in 1905. He studied for the ministry and in 1934 left Korea for further study in America. The persecution that Christians suffered from the Japanese led many to study the Book of the Revelation with its promise of Christ’s victory. Park determined to memorize the book as he made the long trip from Korea to Philadelphia. This accomplishment is one indication of a life of remarkable discipline and dedication. He graduated with a Th.M. degree from Westminster Seminary in 1936 and after further study returned to Korea to take up pastoral work in very difficult circumstances.

He became an influential teacher and scholar. He wrote commentaries on the entire Bible, commentaries that have had a profound impact on the development of Korean Christianity.

His influence was also great by the model of prayer that he offered to the church. Each morning after early morning prayers in the church, he spent an additional two hours in prayer. The commitment to prayer among Korean Christians is believed by many to be the source of the remarkable growth and vitality of the churches. Dr. Park was one of the key founders of the Hapdong Seminary.

From the times of persecution (including not only the Japanese occupation until 1945, but also the Korean War) developed the institution of early morning prayers among the pious Korean Christians. Each morning in the Korean churches a service is held with a brief time of singing, a sermon and at least one hall hour of prayer. The method of prayer is very interesting. Everyone prays aloud at the same time.

At the Hapdong Seminary early morning prayers are held at 5:30 each morning. My initial response to all praying aloud together was negative. It seemed so confusing to me. I found it difficult to concentrate on my prayers. But I realized that as one got used to this method, it had advantages. I remembered that “mental” prayer, what we call silent prayer, was really a rather recent practice (probably since the 17th century) among Christians. I also noticed that the Korean form of prayer allowed considerable range for emotional expression. Most people prayed softly, really muttering as they spoke to God. Some, however, shouted. Others wailed as they prayed. From excited praise and petition to lamentation a full range of emotions could be expressed. Perhaps this is a way that more expression of emotion can be brought into our prayer meetings.

My time at the seminary was a treat as I enjoyed most gracious Korean hospitality. The faculty and students were very friendly and I enjoyed an excellent student concert marking the anniversary of the seminary’s founding. When I returned to America, my children were fascinated to learn of the staples of the Korean seminarian’s breakfast: rice with black beans, hot cabbage soup, seaweed and kim chi. It was good.

On my way to the airport as I left Korea, I was taken to tour the largest Presbyterian church in Seoul. The Choong Hyun Presbyterian Church has 22,000 members. It has 23 ministers and 22 evangelists on its staff. It meets in a huge Gothic building that seats 5500. It has 4 morning services and a total staff of 200. Its senior pastor, Dr. Sung Jong Shin, a Westminster graduate, graciously showed me the marvelous facilities of the church which included kitchens to feed 7000 each Sunday and a multi-level parking garage. The tiny Christian community that faced severe persecution in the early twentieth century has been blessed by the Lord with most remarkable growth.

One of my favorite passages of Scripture came to mind, “Nothing can hinder the Lord from saving, whether by many or by few” (I Samuel 14:6). The Lord has done a wonderful work of grace in Korea. Those who suffered and prayed have seen the windows of heaven opened and grace after grace showered upon the churches. Surely there is much that we need to learn from the Korean Christian experience.

Dr. Godfrey, editor of this department, is Professor of Church History at Westminster Seminary in Escondido, CA.