During the course of my ministry, I have often been asked by elders a question about what might be termed “pastoral tenure.” The question often arises within the context of a church’s vacancy and its search for the names of ministers to whom the congregation might extend a call. In the course of their search for a new pastor, many search committees find that there are very few ministers who are willing to consider a call, even though they may have served their present congregation for a lengthy period of time. 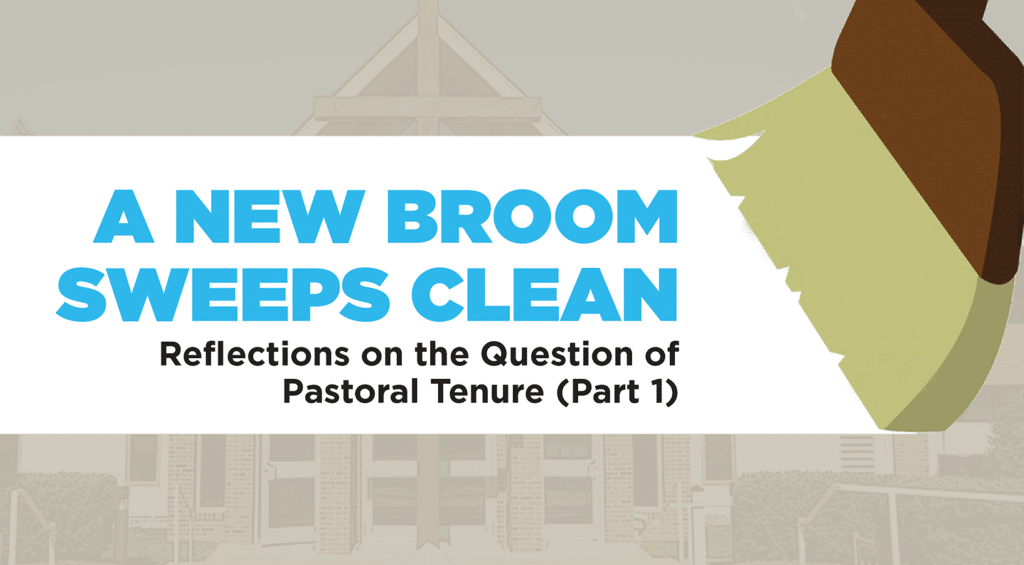 Assuming that pastors with extended experience in their present charge are among the likeliest candidates to serve effectively in their congregation, search committee members are frequently discouraged by the unwillingness of such ministers to be considered for a call. Sometimes in their pursuit of a new pastor, such search committees find themselves compelled to consider ministers from outside of the denomination. Or, even though their congregation is relatively large or judged to require the service of a more experienced pastor, they turn to the consideration of candidates for the ministry despite their relative inexperience.

When listening to the testimony of these elders, I have to acknowledge that their concerns have a measure of legitimacy. Having served on a search committee myself, I can remember only too well how difficult it was to identify potential ministers for our congregation. Few ministers were willing to be considered for a call among those whom we identified early in the process. Most of them did not want to be disturbed by the prospect of having to consider a call. Many of them, either implicitly or explicitly, argued that their work was not yet finished in their present charge. And among these, many gave the impression that they were convinced that they should stay in the present charge “for the long haul.” According to their testimony, a lengthy pastoral tenure in their present charge was more likely to prove fruitful and advantageous to the church than a shorter term of service.

The conviction that a longer term of service in a particular church is to be preferred, even regarded as normative, seems to be the prevailing opinion today. It is especially popular among ministers. But it also has advocates among church members. The problem with this conviction, however, is that it is often unexamined and assumed to be true. Frequently, little or no careful reflection takes place regarding the pros and cons of a lengthy pastoral term of service. For this reason, I am writing this (and a subsequent) article in the hope that it may stimulate more discussion and evaluation of the issue of pastoral tenure. My aim in writing these articles is not so much to provide a one-size-fits-all answer to the question of the optimal length of a pastor’s term of service in a particular church. My aim is to encourage much greater transparency and critical reflection upon those considerations that may favor or oppose lengthy pastorates.

Before I identify the arguments that may be mustered for and against more lengthy pastorates, I believe it will be helpful to recognize the change in practice that has occurred over the years among Reformed churches, especially the Christian Reformed Church (CRC) and the United Reformed Churches in North America (URCNA). The historical evidence that I have reviewed suggests that the contemporary practice of these churches represents what might be called a “new normal.” Whereas in the past ministers tended to move from one church to another after five to eight years of service in a congregation, today the average pastorate is likely to be two or more times as long. Indeed, it is a rarity to find ministers who would view five to eight years of service as much more than the beginning phase of their pastoral service.

If you were to ask, What evidence is there for the claim that longer pastorates are becoming the new normal among Reformed churches? I would be the first to acknowledge that I have not conducted an exhaustive search of the historical evidence. However, I have three lines of evidence that provide a fairly strong case for this claim.

The first piece of evidence is found in an interesting section of the sixth edition of J. L. Schaver’s The Polity of the Churches, revealingly entitled “Extremely Long Pastorates.”1 Schaver’s work was regarded as a standard work on the church polity of the CRC and enjoyed the warm endorsement of two respected professors at Calvin Theological Seminary, D. H. Kromminga and Samuel Volbeda.

After providing his compelling case for claiming that there was a clear trend in the direction of longer pastorates in the CRC, Schaver offers his own, unfavorable assessment of this trend:

The number of years that a minister remained in one place decades ago was at the time thought long enough. Since then the general atmosphere has changed but not in favor of longer pastorates. However, many churches and ministers must put up with a situation in which the average pastorate is about twice as long as it was years ago. Especially the many extremely long pastorates of our day, terminated frequently only by retirement or death, place a great strain upon many a congregation and especially upon its minister. Even though there be no trouble between the minister and the church, long pastorates on the whole have more disadvantages than advantages.2

Though Schaver clearly shows his hand regarding the desirability of longer pastorates, he doesn’t provide any explanation for his negative assessment.

The second line of evidence that lends support to the claim that the trend is in the direction of longer pastorates derives from an analysis of the directory of the URCNA (2017 edition). Based upon my unscientific review of the information in the directory, the average length of pastoral tenure in the URCNA is approximately thirteen years. If my rough calculation is correct, this suggests that the pattern Schaver observed in the 1940s has continued to the present day. What Schaver termed “extremely long pastorates” would be, by today’s standards, considered a relatively short pastorate. Or, to put the matter in a slightly different way, the length of pastorates has once again doubled since the period Schaver analyzed in his church polity book. However this change is evaluated, whether negatively or positively, it is undeniably a change. And it is a change that warrants our scrutiny and reflection.

I conclude with a third line of evidence that is, admittedly, anecdotal in nature. Readers of this article may be puzzled by its title, perhaps even suspicious that it tips my hand as to my opinion regarding the length of pastorates. I use this idiomatic expression, however, for a specific reason. I am what is known as a PK, that is, a preacher’s kid. My father was a minister in four different Reformed denominations (CRC, RCNZ, OPC, and URC) for a period of nearly sixty years. Throughout the course of his ministry, which included many different pastorates (some for only three or four years, others for five to ten years), he often quoted his respected professor, R. B. Kuiper. According to my father’s testimony, R.B, as he was affectionately known, often remarked to his students, “remember, men, a ‘new broom sweeps clean.’” According to R.B., an unduly long pastorate risks the likelihood that a minister’s fruitfulness and effectiveness would wane over time. What we today term “pastoral burnout” (which usually means a minister is losing his enthusiasm and vitality in his pastoral labors) would be diminished when ministers, like new brooms, took up the challenge of a new charge in another congregation. To guard against this prospect, R.B. would often give his students advice regarding their first and second pastorates. According to my father’s testimony, he would advise students, for example, to serve for a shorter period of time in their first charge and then make it their practice in a second charge to revise one older sermon per week and ordinarily write only one new sermon per week. The point of this advice was to encourage the students to adopt a pattern that would enable them to stay the course in the ministry, without losing their freshness, vitality, and enthusiasm along the way.

Now it is possible that this anecdotal evidence will not carry much weight for some. You may be inclined to respond by saying, “But that’s only one professor’s opinion, and it sounds like it was an easy way for your father to rationalize his own restlessness and inability to stay the course for an adequate amount of time.” While there may be some truth in this response, at least so far as my father’s purpose in citing R.B.’s quip, it overlooks the fact that Kuiper was the president of Calvin Theological Seminary at the time, and a highly respected professor of practical theology. In those days, Kuiper’s opinion carried more than a little weight. It reflected a general sentiment among the churches and ministers at the time. You might even say that it was a species of ecclesiastical wisdom that belonged to the church’s ethos in the period. Therefore, when I cite this anecdotal evidence, I cite it in order to confirm that a popular sentiment in the churches in a previous generation no longer has the traction it once did. In other words, it provides further evidence for suggesting that longer pastorates are a new normal. They represent a change from previous practice.

None of this historical evidence for a change in the length of pastoral tenure constitutes an argument for or against lengthy pastorates. I offer it only to establish the simple point that there has been a remarkable increase in their length, and this increase deserves further examination. Undoubtedly, there are reasons for the change, but I have not sought to identify them in this article. In my next article, I will endeavor to identify some of the factors or reasons that may help to explain this change. Once these factors and reasons are identified, we will be in a position to evaluate the pros and cons for shorter or more lengthy pastorates.

Dr. Cornelis P. Venema is president of Mid-America Reformed Seminary in Dyer, IN. He is a contributing editor of The Outlook.