“But as for you, Bethlehem Ephrathah, too little to be among the clans ofJudah, from you One will go forth for Me to be ruler in Israel. His goings forth are from long ago, from the days of eternity.” Micah 5:2

When the wise men came in those early months following the birth of Jesus, they asked to see the new king. Those who heard the unexpected message were rather disturbed. Judea already had a king and that king was Herod. No one had been born to his family to take the throne. The only thing the inquiry of the magi could mean was the end of his reign.

As a crafty old politician, Herod was not about to let rumors of a new king threaten his throne. He did not know who the new king-to-be was, so he set out to discover the place where this king was born so that he could put an end to the threat to his throne. If anybody would know the birthplace of the King of the Jews, it would be the Old Testament scholars. The chief priests and the teachers of the law knew the answer to this first century Bible Trivia question. At Herod’s request, they reported that the ruler of all Israel would be born in Bethlehem. Yet, for all their wisdom, not one of the Jewish leaders took the time to investigate the report of the long anticipated birth of the Messiah.

Herod was right on the ball. Not doubting the words of the magi concerning his future rival, he sent troops to Bethlehem to kill all the children two years of age and under. The leaders of Jerusalem, however, took very little interest in the report of the wise men. They were the ones who should have had a vested interest in the birth of the Messiah! After all, He was to be their king-the one who would deliver them from their bondage. Bethlehem was only about five miles south ofJerusalem. It would have been easy to go and see this thing that had been reported to them by the magi. But they were too busy, too lazy, too comfortable, or too unconcerned to make the short trip.

Micah prophesied that the One who would rule over God’s people forever would come out of Bethlehem. Joseph, the adoptive father of Jesus, and Mary, His virgin mother, however, lived in Nazareth. How could it happen that Jesus, their son, would be born in the place prophesied by Micah? The great Caesar had a quarrel with Herod. In order to get even with Herod, Caesar determined that Judea would be taxed. No longer would Caesar recognize Judea as an independent separate colony, but it was to be within the imperial province. As such, it had to render tribute to Caesar. In addition, not only would those living in Judea have to pay taxes, but all of her citizens would have to register in their ancestral home. That was highly unusual! The great emperor of the world was used by God to accomplish His purposes: to bring a nine month pregnant teenage girl to Bethlehem that she might give birth to the Messiah, according to the Scriptures. Caesar’s spur of the moment whim was by God’s decree! 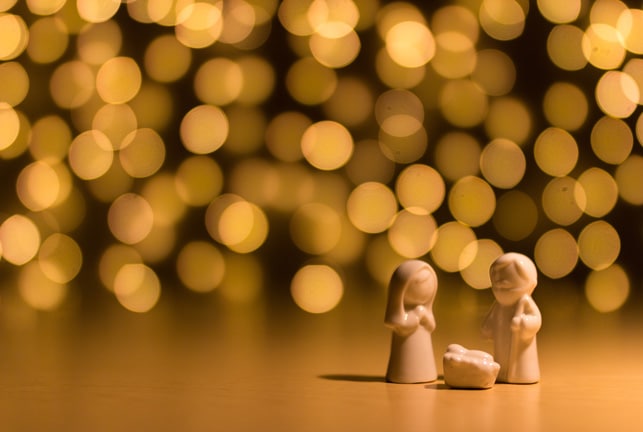 Every Christmas season articles in a variety of magazines seek to identify the One whose birth we celebrate. Some declare that Jesus was a scholar. Some say Jesus was a misunderstood, misquoted, and maligned teacher. Others claim Jesus to be a community organizer, a social reformer. This prophesied descendant of David was no inconsequential person. Whoever He was that the magi asked about, He was not One to be merely counted by the census bureau and then forgotten. No, this child was to be ruler over Israel.

There are two reasons why the One prophesied by Micah is the legitimate ruler of Israel and over all of God’s people. First of all, He is the eternal Son of God and therefore the only absolute and rightful monarch over all the people of the world. Micah refers to Him as the One whose “goings forth are from long ago, from the days of eternity.”

When the wise men came to Jerusalem they asked a very peculiar question. They asked a very peculiar question. They asked for One who from the moment of His birth was already king. Have you ever considered how unusual that is? Even though one may be born into a royal family and destined to be king, it is necessary to wait for the death of the present monarch before that person can ascend the throne. The child whom the wise men sought was king at birth. It was so because Jesus had been king from the very beginning of time. His is King of kings, the eternal Lord of lords. Jesus was born not to become a ruler, He came as the ruler of His people already. The second reason Jesus is our legitimate ruler is through His work. Jesus came to redeem His people from the shackles of sin. F or that purpose Jesus went to the cross. There He earned the right to rule over us. It is at this point that the prophecy of Micah becomes very personal. The issue is no longer a question about whether this child born in Bethlehem so long ago really grew up to be a ruler, scholar, community organizer, etc. The question is: Is He your ruler and king? Have you bowed your knee to Him and confessed Him as your Lord? If this mighty ruler from the little town ofBethlehem is not your ruler then you must make Him your ruler. There are no excuses for staying away from Jesus. The scholars in Jerusalem did not think they had to go and see the one who was born king over them. They stayed in the city. They continued to look at the Scriptures, but they never looked to Jesus. Do not make that same mistake! Acknowledge Him as your Savior and as the King of your life.

Rev. Wybren H. Oord is the Pastor of the Covenant United Reformed Church in Kalamazoo, Michigan. He is also the editor of The Outlook.