The second coming of Jesus Christ is not a favorite subject for many Christians. They feel uneasy about it, uncomfortable about it, and all too often, apathetic about it. Most Christians, if they heard that Jesus was coming again—and coming very soon—would panic. Maybe we need to know more about this second coming so that we can react to it in a proper way.

But we have to understand that Advent—the period we are now in on the church calendar—is to be a preparing not only for the first coming of Jesus. It must also be a preparation for the future event, that is, the second coming of Jesus into this world. We don’t have much trouble with the first advent, do we? Why, that already happened some two thousand years ago. It is a historical fact, and I dare say that all those who read The Outlook believe that this historical fact did take place. Jesus, the Son of God, came into this world.

If you didn’t believe it, you would probably celebrate the holiday a lot differently than you do now. You might still decorate your home, exchange gifts, and go to Christmas parties. But you probably would not go Christmas caroling in nursing homes or be in church on the twenty-fifth of the month. 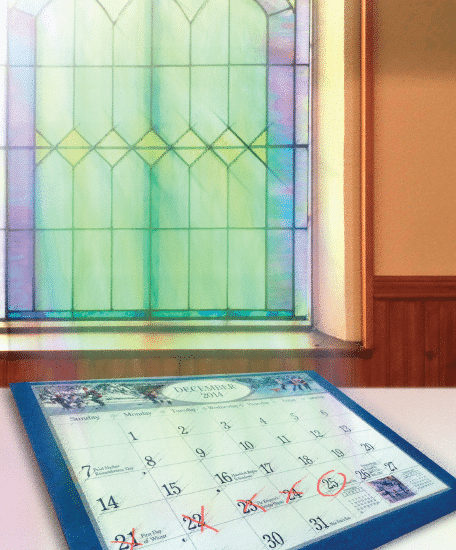 Television commercials, newspaper ads, and our children all remind us of exactly how many shopping days remain until Christmas. And so, we keep ourselves very busy from now until Christmas. We are busy with our shopping, our caroling, going to Christmas parties and programs, getting ready for all the company, and so on.

Now suppose that instead of the first coming, the second coming of Christ were to take place in less than a month. How busy would you be from now until then, and what would your busyness look like? Would you still be doing the same kind of things that you are doing now in preparation for the holidays?

It could take place. Do you believe that? If somebody told you that Jesus would come again this month, would you believe it? Perhaps you would write him off as some kind of religious fanatic and think nothing more of it.

The Hour Has Come

No one knows for certain when Christ will come again. It could be years from now; it could be several months. It might also be in a few hours or days. For that matter, it could even be in just a few seconds.

But the second coming of Jesus Christ is so “iffy” to us. It’s all so out there somewhere, isn’t it? We don’t think about it that often. We know the Bible is true. We have no doubt whatsoever that Christ is going to return someday. Even so, with all the other things we have to think about—especially in this time of year—and all the things we have to worry about in this life, why get uptight about something that might not happen for some time yet?

Maybe when we are older and we have more time on our hands. Then we will worry about the second coming of Christ. Meanwhile, here it is the twenty-first century. We are in the last few days of this year, and there is a holiday bearing down on us for which we need to prepare. The second coming will have to wait.

What we need to remember is that you cannot get ready for Christmas—the first coming of Jesus—without preparing for the second coming of Jesus at the same time. It is like getting ready for two parties in one evening. Perhaps you have had that happen at graduation time. You were invited to several graduation parties in the same evening. How do you get ready for those parties? Certainly, you did not return home to change clothes between parties. No. When you prepared for the one, you were prepared for the others, as well. They would require the same kind of preparation.

We must recognize who this Jesus is who came into the world so long ago and who will come again. That is how to truly prepare ourselves for Christmas. Do you really know who this child is who was born in a manger so many years ago and clearly said that He was coming again?

Paul writes, “The hour has come.” God had said that in the fullness of time the first coming of the Christ would appear—and He did. God has said that He would come again—and He will. Just as Christmas fills us with great excitement and hope, so also the knowledge of Christ’s return should thrill us. Joy—not fear—should be our reaction to the announcement of Christ’s appearing.

The coming of Jesus Christ should excite us more than some of those families that you read about in the newspaper who have discovered a long-lost relative. It should be filled with more joy than or someone who is returning home after many years away. Christ’s return should excite us more than a bride awaiting her wedding day. Think of the preparations she makes! She sends out all the invitations. She reserves the banquet hall and decorates it. She registers at various stores. She picks out a special dress for the occasion. She picks out colors and styles for the bridesmaids’ dresses. On and on the preparations go—all for that one day. Christ’s second coming should excite us more than that. We should prepare for His return more than a bride prepares for her wedding. Sometimes we are lethargic and indifferent without even knowing it. We get so used to something that it has no effect on us anymore. Not that long ago I was discussing general revelation with someone. I marvel over the coulees in the plains of Alberta and how they change in appearance with the seasons.

We often get so used to our surroundings we fail to see the beauty in them. Sometimes our religion can be the same way. We get so used to the things we believe that we take them for granted. The coming of Christ should excite us! He has won the victory for us on the cross. Our lives are changed. Paul writes, “The hour has come for you to wake up from your slumber.” This is not a time to sleep! We need to wake up to the fact that Christ is coming again and we need to prepare for His return. Having said that, do we even know how to prepare or Christ’s return? The commercialism that celebrates His first arrival certainly testifies how unprepared we are for His second arrival.

The first thing that happens when most people wake up is that they remove their pajamas and put on the proper attire for the day. That is exactly how Paul tells us to prepare for the return of our Lord. He tells us that we should wake up from our spiritual slumber by putting aside the deeds of darkness and putting on the armor of light.

These are garments that are as black as the night. Perhaps that is why these things are so often done in secret and in the night behind other people’s backs. How sad that these things happen in our homes, in our schools, in our workplaces, and even in the church. Do you come to church to grow in the Spirit or to divide the church with quarreling and dissension? These are garments that need to be shed before the second coming of the Lord.

There is, however, clothing that is spotless; a garment that is without wrinkle; a robe perfectly acceptable to the bridegroom. It is the righteousness of Christ. The good news is that Jesus Himself provides it. He gives us the robe of His righteousness through His sacrifice on the cross. That is why Paul repeatedly exhorts us to put on Christ.

That means recognizing Jesus as your Lord and Savior. It means changing your lifestyle so that the things of the world are not as important to you as the things of heaven. It means longing for the second coming of Jesus Christ.

I once knew a wonderful saint who was sitting in her bed reading a book when she died. The title of the book was The Imitation of Christ by Thomas à Kempis. What a wonderful way to prepare to die! What a wonderful way to live—to strive to be an imitator of Christ. None of us can live up to the perfect obedience that Jesus Christ displayed during His ministry, but what glory there is in trying to imitate Him.

Our confession is acknowledging that Jesus Christ is our deliverer from Satan and from sin. He came into this world because of our sin. His sacrifice has taken care of our sin. He is coming again to take us to glory.

While we are waiting for that second advent we are to live for Christ, to love Christ, and to follow Christ. By doing so in faith we are given a wardrobe that is suitable for the great day of His coming.

It is rather simple. If you have confessed with heart and mouth that Jesus Christ is your Savior and your Lord; if you believe His death on the cross is all you need for the forgiveness of sins and reconciliation with the Father in heaven; and if your hope for eternal life rests in the cross, then your life has changed.

If you are already with Christ, then you are ready for Christ. No wonder the saints have been crying out through the ages: “Even so, Lord Jesus, come quickly.”