Bob was chairman of the evangelism committee at 1st Reformed Presbyterian Church. He had taken the position with great enthusiasm, wanting to serve his Lord and help his church honor the Great Commission. He had held the position for 7 years, but his tenure had been marked by struggles: members of the church without evangelism zeal (perhaps because they had been raised in the faith and never knew what it was like to be without hope and without God in the world), theological hobbyists who would rather debate the relationship between election and evangelism than share the faith with an unbeliever, an annual budget that gave evidence of his congregation’s lack of commitment to reaching the lost (at least locally; they gave thousands to world missions, but committed a pittance for local efforts). And Bob was tired of it. So tired, in fact, that he was thinking both of resigning the committee and leaving for a church that actually cared about evangelism.

Sally wasn’t sleeping or eating well. Since her husband George left her and the kids for another man, her life had been a nightmare. She ran the gamut of emotions: humiliation, loss, anger, grief, sadness for the children, confusion about homosexuality and the church’s ministry to homosexuals, not to mention a numbing loss of self-image (“He left me for a man??? What’s wrong with me?”). But what seemed to hurt just as much was the thundering silence of the church. No one came by to visit with her. She heard a couple elders had tried to get hold of George to rebuke him for his sin, but everyone treated her as if she had leprosy. She noticed people talking about her in the lobby of church, and Sally knew people cared. But the fact that they didn’t know what to say to her wasn’t much comfort. She was hurting, she needed to talk about it and cry about it with fellow believers. And no one was there.

Perhaps the stories aren’t exactly like experiences you’ve had. But they’re close.

No, the issue of this article isn’t the problem many Reformed and Presbyterian Christians have with evangelism, nor is it about homosexuality and its many consequences.

First, let’s define terms. In the original, the word usually translated “encouragement” is “parakletos.” Sometimes, it’s rendered as “comfort” or “consolation” or even “counsel.” The word bears the connotation of “coming alongside of” someone to help them along. I’ve often thought of a father running alongside a 5-year-old son or daughter while he or she learns to ride a bicycle, dad’s hand on the back of the seat for steadying, voice calming the fears of the youngster. Encouragement. Or of the teammates of an Olympic athlete who runs the grueling marathon. Lined up at about the 20-mile mark, when the runner runs out of glycogen in the bloodstream and hits the “wall,” their shouts of “You can do it!” and “You’re looking great!” buoy up the spirits of the exhausted athlete. Encouragement. Or of the “cloud of witnesses” in Hebrews 12:1 who sit in the heavenly arena, having already suffered and won so much in Christ, serving to encourage us who slog through the tribulations and opposition of life in a post-Christian world. Encouragement. 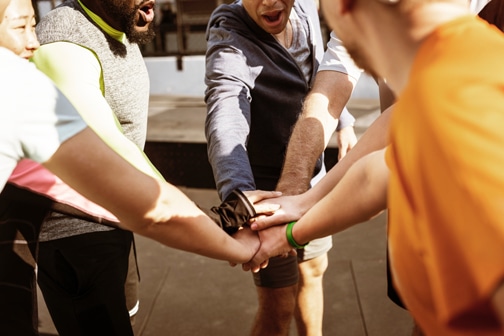 The Holy Spirit is called the Paraclete—the same Greek word—in John 14:26, and His ministry is that of encouragement, comfort, and consolation to the oppressed church, the church Jesus told to be prepared to suffer for Him.

Far from merely observing the definition of a Greek term, however, I want to point out to all the readers of this column that God’s Word assigns the work of encouragement—with all the connotations I’ve described above—to the whole church and especially to the shepherds of the flock. Consider this simple listing of direct mandates (a list that doesn’t even touch the hundreds of other references to encouragement as the lifestyle and function of God’s church):

• I Thessalonians 4:18 – “therefore encourage one another” (regardingthe Lord’s return)

• I Thessalonians 5:11 – “therefore encourage one another and build each other up” (regarding life in this world)

• Titus 1:9 – an elder must “encourage others by sound doctrine”

• Hebrews 10:25 – “Let us encourage one another and all the more as you see the Day approachlng.”

I don’t know about you, but I don’t see that kind of ministry among the people of God very often. I see much more individualism and privacy (life in our little cocoons), much less involvement with the lives of our brothers and sisters in the body of believers. And even when some venture to strive toward some sort of Christian community, that sense of community usually evaporates at the first sign of the awkward or unusual circumstance (like Sally above). We can handle death and grief – after all, we see it all the time, don’t we? And we know how to handle Bob, the evangelism chairman. Either let him resign or leave, or challenge him with his “duty”, but by all means don’t pamper him with too much attention while he’s having a pity party!! (Sorry. Couldn’t resist the sarcasm.) But when someone is caught up in sin we don’t encourage, we judge. When someone (like Sally) is broken by the sins of someone else, we cluck our tongues at the horrific nature of the sin, but stand by and wonder whether she might have done something (or failed to do something) to contribute to George’s actions.

Reminds me of the true story of the woman shattered by the death of her teenaged son in a motorcycle accident. After some weeks of debilitating grief, she finally made it back to her weekly Bible Study and the women with whom she had opened the Word regularly for years. After the initial hugs and greetings, they sat down in awkward silence, until one woman (who seemed to voice the question all wanted to ask) spoke: “Tell me, dear. Was he wearing his helmet?”

Instead of such judgment, such attitudes, such insensitivity and awkwardness, God’s Word calls us to encouragement. To throw an arm around the shoulders of the broken and bleeding (whether the brokenness and bleeding was caused by their own sin or not!), to lift up the weary who have faced so many obstacles in their walk that they are tempted to give up, to give perspective to those who have lost it because of the burdens of life.

That’s encouragement. And that’s our calling.

I challenge your eldership to ask the questions: Are we encouragers? Who in our care needs more encouragement?

I challenge every reader: How can I encourage my brothers and sisters?

Here are a few ideas. If you’ve ever had a miscarriage, think of how much your words would mean to someone else who just lost a baby. If you had an abortion (perhaps before you came to Christ, or in a time of bleak despair), think of how much value your counsel would mean to a young woman contemplating that hopeless decision. If you’ve buried a loved one recently, your words will mean much more to a recently bereaved friend. If you’ve struggled WIth a wandering son or daughter, your encouragement will mean more than you can ever imagine to a father or mother who is brokenhearted over their child’s defection from the church.

Get the point? If you’ve struggled, and God has brought you through It, you are exactly suited to encourage others with the struggles of life.

Strikingly, that’s exactly God’s point: “Praise be…to the God of all encouragement, who encourages us in all our troubles, so that we can encourage those in any trouble with the encouragement we ourselves have received from God” (2 Corinthians 1:3–4).

Dr. Sittema is pastor of Bethel Christian Reformed Church in Dallas, Texas, and a contributing editor of The Outlook.