Reformed Youth Services (RYS) might well be regarded as one of best things going for the United Reformed Churches in North America. RYS membership of nearly one hundred churches also includes churches from the Christian Reformed Church, Orthodox Presbyterian Church, Presbyterian Church of America, Reformed Church in the US, and some independent Reformed congregations. RYS is governed by a board made up of eight men from among its member churches, under the supervision of the elders of Cornerstone URC in Jenison, Michigan, and chaired by one of its elders. RYS sponsors regional retreats for high-school-aged youth and regional Logos conferences for post-high youth.

The highlight that high-school-aged youth from among the member churches look forward to every year is the annual RYS Convention. The 2015 convention drew approximately 720 high-school-aged youth, youth leaders, convention speakers, and staff to Asbury University in Wilmont, Kentucky, on July 13–17. The theme of the week was “Amazing Love,” based on Romans 8:37–39: “We are more than conquerors through him who loved us. For I am sure that neither death nor life, nor angels nor rulers, nor things present nor things to come, nor powers, nor height nor depth, nor anything else in all creation, will be able to separate us from the love of God in Christ Jesus our Lord.”In five main sessions, all were challenged to comprehend, as much as is humanly possible, the eternal, boundless, and revealed love of God in Christ through His Spirit.

RYS Director Ed DeGraaf, who has held that position since before the first convention, assessed that this was perhaps the best convention ever. Ed said, “A gracious servant-minded committee set the tone at convention from day one as we enjoyed a wonderful week of spiritual blessings and fellowship.” Ed also observed, “Rev. Mike Schout and Rev. Bob VanManen complimented each other well as the main speakers.” The university campus was ideal, leaving minimal walking to get to workshops; the dorms were nice; and the food was good and plentiful. Everyone especially enjoyed the air conditioning. 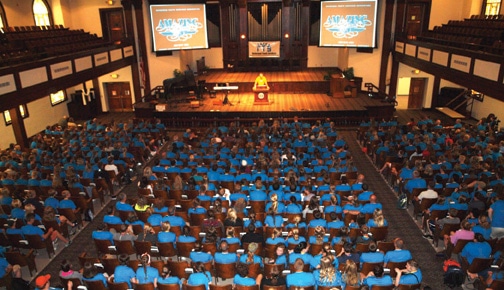 Convention speakers and workshop leaders are always chosen from among the pastors of the member churches. The workshop leaders for this convention were Rev. Quentin Falkena on “iLead”; Rev. Greg Lubbers on “Amazing Grace”; Rev. Brad Nymeyer on “Loving God’s Will”; Rev. Bill Boekestein on “Money Matters”; Rev. Paul Murphy on “Guard Your Heart”; Rev. Chip Byrd on “Gigabytes for God”; Rev. Chad Steenwyk on “Love My Neighbor”; Rev. Stephen Wetmore on “Content, Not So Much?”; Rev. Jon Bushnell on “Do You Believe This Stuff?”; and Rev. Andrew Knott on “Wonderfully Made.” There was a mandatory workshop entitled “What’s Love Got to Do with It?” One was designed for the guys led by Rev. Jason Tuinstra, and one for the girls led by Rev. Tuinstra’s wife, Jody. Everyone had opportunity to attend four out of the ten workshops offered.

Each main session was begun with singing, which was beautiful with more than seven hundred voices in a near-capacity auditorium. The song leader was Julie Bussis, along with Rip Pratt and Brent Cooper, who have been long-time convention song leaders. Thursday evening featured a talent show where various voluntary participants performed. A choir made up of conventioneers practiced throughout the week and performed at that time as well. Also at that time a new RYS logo was publicly unveiled for the first time.

RYS conventions always feature a day-away event. On Wednesday, about five hundred people chose to go to Kentucky Kingdom and Hurricane Bay, while two hundred took advantage of spending the day at the Creation Museum. On Thursday afternoon a time was set aside when all the speakers and workshop leaders were seated together up front to answer questions which were submitted by the students in writing.

The days were jam-packed, beginning before 7:00 a.m. with SON-rise groups for devotions after breakfast, and ending late at night with SON-set groups for closing devotions and a time to share thoughts about the presentations of that day. Ample time was also provided for games and fellowship. Friends from previous conventions were reunited, and new friends were made. It is a great opportunity to bring together covenant youth from churches of like mind from all around North America. Some come from more isolated areas where there are no like-minded Reformed churches nearby and such opportunities are rare.

It takes many adults to run a youth ministry. At one time during the convention, everyone over the age of fifty was asked to rise. It was estimated that there were at least sixty people on their feet. Youth leaders (sponsors) enjoy and benefit from the spiritual blessings and the fellowship during a convention as much as do the youth. Besides the dozen ministers who serve as speakers and workshop leaders, a number of other pastors often come as sponsors and enjoy the fellowship with each other throughout the week.

My wife and I had the opportunity to attend the 2015 convention for the first time. I am happy to report to the parents and the consistories that as I observed your youth throughout the week, I was extremely proud of all in attendance. It gave a glimpse of the future of the church, and it looks good. These young people were well-behaved, orderly, polite, considerate, attentive, and asked great questions. The convention committee and the board were happy that there were no disciplinary actions required throughout that entire week with so many youth gathered together. We give praise to our God for the many blessings and the safety experienced during this special week.

At the close of the convention it was announced that the 2016 convention is to be held at Evangel University in Springfield, Missouri, on July 25–29. The 2005 convention was held there, and the campus has since been updated. Next year, 2016, will also be the twentieth anniversary of RYS.

Each year letters are sent out to all member church councils asking for nominations to the RYS board. Councils are encouraged to submit names of mature Christian men able to serve. Men so inclined are encouraged to inform their council that they would like to be considered. This is a great opportunity to be a part of this great ministry to our youth. The lives of countless covenant youth have been changed throughout the years through the RYS programs and particularly the annual convention. It was an honor and a privilege to be a part of this their special week.

Mr. Myron Rau is a board member of RYS and is the chairman of the board of Reformed Fellowship. He is a member of the Covenant United Reformed Church in Kalamazoo, MI.