Every graduation is special to the graduates, and Westminster Seminary California has been blessed with a number of gifted commencement speakers in the recent past our own Hywel Jones, John Piper, Ken Myers, just to name a few. In fairness to the speakers, giving a commencement speech is a real challenge. A commencement ceremony is a little like a wedding ceremony. There are a lot of arrangements-pictures to be taken, special clothing to be worn, guests to be invited, and more. It arrives with much anticipation and nervous energy. Most people want the whole thing to go off without a hitch. Parents are beaming with joy and pride. Each actual participant must stand before a crowd and do his part, and into all this comes a speaker, usually an outsider, who has to try to say something meaningful to people he does not know, which most will forget before the event is over.

Not so this year.

Westminster Seminary California’s speaker this year was R.C. Sproul. Despite all the distractions and the very real physical challenge of traveling cross county, he made a lasting impression with his commencement address, “The Power of the Gospel.” He told the story of Luther’s last sermon, given in Eiselben in 1546. In this sermon Luther warned the congregation to resist the temptation to try to add to the gospel, to try to remove the offense of the faith. He warned them about certain “jackanapes” (impertinent persons) who were corrupting the gospel, and he exhorted them to let the gospel be the gospel.

Narrowly construed, the word gospel stands for the announcement of great good news, of Jesus’ incarnation, obedience for His people, His mediatorial death, His vindication in resurrection and His ascension into royal power. The gospel, broadly construed as the Christian message to the world and thus including the command to repent, is not a negotiation, it is not a request. It is not calculated to create warm feelings or to enhance self-esteem. As Luther before him, Dr. Sproul called us all to utter fidelity to an uncompromised and uncompromising Christian faith.

The students had an opportunity to see and hear a man who seemed to have the spirit of Luther upon him. ” I hope and guess they will not forget it soon.

The audio of Dr. Sproul’s address can be heard online at http:// www. wscal. edu/newsevents/ commencement08report.php.

The eighteenth commencement of Greenville Presbyterian Theological Seminary (GPTS) in Taylors, SC, was held on May 16, 2008, in the auditorium of the nearby Academy of Arts.

Rev. Richard Holst, a retired minister of the Evangelical Presbyterian Church of England and Wales, preached on Acts 20 on “A Pastor’s Testimony.” Rev. Holst has served as the pastor of Bethel Presbyterian Church in Cardiff, Wales, and is the father of Matthew Hulst, a Master of Divinity graduate, and Jonathan Holst, an alumnus serving an OPC church on the East Coast.

This past May 16, PRTS held their 2008 commencement with three graduates, all of whom graduated with a Th.M. degree. Dr. Hywel Rees Jones, Visiting Professor of Practical Theology, gave the graduation address entitled “Offer the Sacrifice of Praise.” Dr. Joel R. Beeke, president of PRTS, offered each graduate a personal charge and a gift of books. The three graduates are: Mr. Roberio Odair Basilio de Azevedo, who is returning to his native Brazil to serve in the Presbyterian Church there; Mr. Hyonam (David) Kim, who is applying for Ph.D. studies; and Mr. Andrew Parker, who is applying for positions in seminary administration.

Puritan Reformed Theological Seminary opened in 1995 with four theological students from the Heritage Reformed Congregations. When we first opened, the vision of PRTS was to provide a high quality, four-year seminary program for men accepted by the Heritage Reformed Congregations (HRC) to train for pastoral ministry. After one year, that vision broadened to include training men from other denominations, providing that they meet the admission requirements and adhere to the Reformed confessional tradition represented in the Three Forms of Unity or the Westminster Standards. In 1998, the Free Reformed Churches of North America (PRC) chose to train their theological students at PRTS at which time Dr. Gerald Bilke came on board as the second fulltime professor, teaching Old and New Testament Studies.

In 2004, we moved to our current campus in northeast Grand Rapids. In October of 2005, we opened and dedicated the Puritan Resource Center, a unique part of our library intended to allow people from around the world access to a wide variety of Puritan literature and to gain a deeper appreciation for the Puritan tradition.

Dr. David Murray was added as third full-time professor of Old Testament and Practical Theology in the fall of 2007. The faculty also includes thirty instructors, experts in their fields of study, who offer module courses. From 1995–2008 PRTS has officially graduated 34 men; other part-time students have taken many courses throughout the years. Alumni are serving the church of Jesus Christ in various ways: pastoring, preaching, teaching, pursuing further education, international missions, domestic missions, and church planting.

Presently, PRTS offers three degrees accredited by the ARTS (Association ofReformed Theological Schools): Master of Arts in Religion, Master of Divinity, and Master of Theology. For this fall, PRTS is expecting seventy-five students, coming from twenty-five different denominations, and about a dozen countries. Each year is seeing substantial growth. The Board of Trustees has recently hired a Long Distance Training Director and a Development and Marketing Director. The seminary anticipates adding two more full-time faculty in the next few years. We rejoice in the spirit of unity found among the faculty, staff, and student body, all of which has caught the vision to spread Reformed truth around the globe.

The twenty-third annual commencement of Mid-America Reformed Seminary in Dyer, IN, was held on May 16, 2008, at Calvary Community Church in South Holland, IL.

Dr. John R. Sittema, Board ofTrustees member and pastor of Christ Church (PCA) in Jacksonville, FL, delivered the commencement address: “Preach the Word!” The address was based on the first two verses of 2 Timothy 4: “I charge you in the presence of God and of Christ Jesus, who is to judge the living and the dead, and by his appearing and his kingdom: preach the word; be ready in season and out of season; reprove, rebuke, and exhort, with complete patience and teaching.” 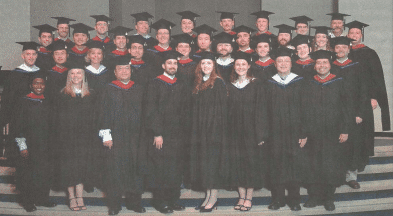